Drive Deep Into The Wild

ROAD AND WIND noise engulf the cabin of the Ford Bronco as we’re barreling down the highway at speed in the soft dawn light. The clamor is just as well, I think to myself. No one gets a Bronco to have a quiet life. We’re crossing Michigan’s Mackinac Bridge—the longest suspension bridge in the western hemisphere—that also happens to straddle two of the Great Lakes, one bearing the state’s namesake, and Lake Huron. The low-angle sun is a brilliant yellow orb rippling across the blue water, and as we cross the bridge the light is now favoring one side of the highway. Though I had been cursing my all-too-sudden alarm ringing rudely at 5am, you never quite regret a sunrise, do you?

Today’s adventure will see us swap these “pedestrian” Broncos for the new Bronco Everglades, which Ford says is “for that customer that wants to go deep in the wild, and have confidence to get back safely.” This Bronco essentially serves as a roughly $55,000 purpose-built tool, you can get straight from the factory. Riding on chunky 35-inch Goodyear rubber, with a front bumper and underlying skid plate designed to take on the impact you might encounter when getting into some serious off-roading. Rocks, mud and ruts, snow, gravel, water-wading, you can engage one of Bronco’s G.O.A.T (go over any terrain) modes with a turn of a dial, and choose one of seven settings to match the environment. Aiding the cause of getting back safely is a factory-fitted Warn winch, with a 10,000-pound capacity, and a 100-foot long synthetic cable that Ford modified, so in the unlikely event it snaps, things will be a little less chaotic. 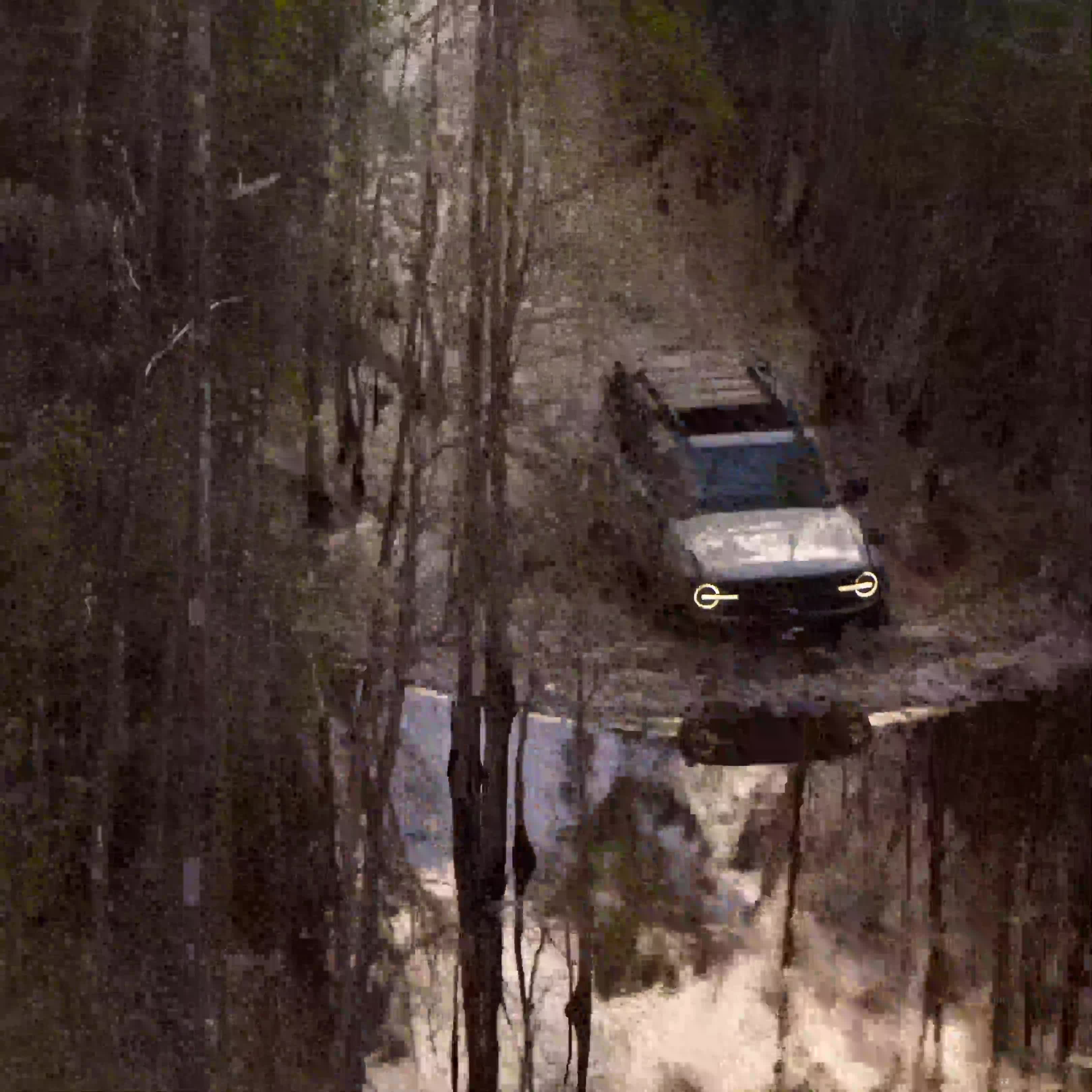 The idea of getting onto public trails that’ll take us deep into the rugged wilderness, and afford us some glorious views of the inner woods is thoroughly appealing. Equal parts adventure, and mental restoration. We take a ferry to get to Drummond Island, which will afford us hours of alluring, public trails.

As in the National Park it borrows its name from, Everglades its capable of getting into deep water—up to three feet—and about a half-foot more than the very capable Jeep Wrangler Rubicon. Ford raised the height of some components, there’s a factory-fitted snorkel, surprisingly the first-ever from the automaker, and we’ll be putting every bit of its capability to the test on some extreme off-roading on this parcel of scenic earth, in the Upper Peninsula of Michigan.

On the island, we set up at the staging area. We apply some spray to keep the ticks and mosquitoes away. There’s a brief on responsible trail usage: stay within the boundary of the trails to avoid widening, leave no trace, we pack out all of our trash. If you plan to venture out, it’s good to refresh on how to be a better steward and recreate thoughtfully, so others can do the same. We have waders, if we get stuck, in addition to looking swamp-savvy, we’ll need those to keep our lower half dry if we have to get out and winch. Heavy rains in the days prior ensure the trails will make our Everglades chic, four-door canoes at times.

Loaded up we head out, and in minutes are crawling single-file through thick woods. Everglades is exclusively powered by a 275 horsepower, 2.3-liter four-cylinder engine, mated to a 10-speed automatic transmission. If you want the lovely six-speed manual transmission, you’ll have to opt for a different Bronco model than the Everglades, at least for now. Importantly, this engine boasts 315 pound-feet of torque, and that low-end power is exactly what you want to tap into when on the trail. The sun has now climbed higher and is filtering through the leaves. All manner of unfamiliar flying creatures, some buzzing some fluttering, some unnervingly large, all swarm about. We might be heading to Jurassic Park, I’m frankly not sure.

Ahead of a series of shallow pools—and of any confirmed live dinosaur sightings, which at the moment seems at least a reasonable possibility—we switch into Mud and Ruts mode. This automatically engages 4Hi—four-wheel drive that allows for a higher speed than 4Lo, which you might use crawling rocks—and the rear lockers, which will help send power to whichever wheel is making contact on the rear axle, or needs more power. This is helpful to push out of ruts, over rocks, and the hidden dips below the murky brown water. 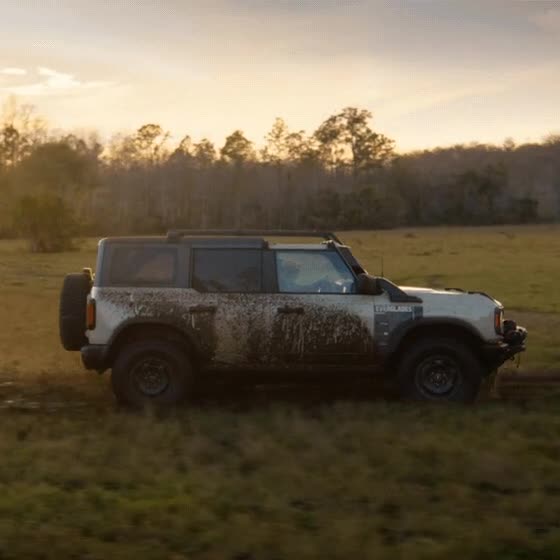 After the first pools we’re in a rhythm, slow-crawling through the thicket and mud. Several more pools and creeks come in fast succession, and at times the Everglades is half-submerged, water sploshing against the doors. At the moment I have the windows rolled up, until I can at least get an ID on some of these creatures that will likely be in the next Avatar film, and better understand their intentions. With vinyl seats, a rubber floor and washout interior, should water breach into the cabin, it’s quite easy to get out.

At one point we emerge from the forest, and find ourselves along the banks of the mighty Huron, Canada sitting idly across the water on the other shore. Because of its relative remoteness and difficulty to get here, you have this stretch of wilderness to yourself. Water laps onto a bed of stones smoothed through the ages. This vista is a natural antidote to stress, I can feel my nervous system calming. After a meditative pause, we’re back on the road, and a series of trails gets us to the steps at Marblehead, a series of small marble rock steps that lead to bigger ones. We switch to Rock Crawl mode, which engages 4Lo, and engage the front lockers, to help get us over these rocky obstacles.

Despite the imperative presence of the winch for a vehicle like Bronco Everglades, it removes the front-view camera, which would be especially helpful in situations precisely like these. But front-view cameras are also a relatively new addition to the world of off-roading, and like generations prior, we make it over just fine.

Splashing and bouncing through another trail we soon find ourselves at Glen Cove, where a lavish lunch prepared by chef Jean-Paul Bourgeois awaits. Local Walleye shawarma with a lovely dill sauce, a beet salad with rhubarb and raspberry, sweet potatoes roasted in an underground pit, this isn’t your average trail eat. And it easily beats my normal PB & J, fruit, ziplock bag of nuts or chips, and sliced veggies. Bourgeois, an accomplished chef who’s cooked in a variety of environments, says this is the “toughest cook I’ve done. Being outdoors, with the variety and quantity of food.” There’s certainly something extra-gratifying about eating on the water in the open air, even with endless summer lake bugs eyeing you for a little lunch, as well. With bellies full, and hours of daylight yet, we load back in to the Bronco Everglades. There’s only one way back, and with a capable steed like this, it’s sure to be gratifying.

This article was originally published by Menshealth.com. Read the original article here.
Previous Post What Parents Need to Know About Monkeypox and School This Fall
Next Post The Bear’s Jeremy Allen White Can Pull Off More Than a Great White T-Shirt