Monday Musings- Gucci Pearls, Travel, Manners, and What I Wore

Happy Monday, ladies. We are off like a herd of turtles on our holiday. It’s a sad state of affairs when you begin packing for a three-week trip at 10:30 pm in a dark bedroom. I didn’t put the light on because my husband was already asleep…smart guy. Uber would arrive at the crack of dawn, so I had to pack then. I had a few things on a rolling rack, but to be honest, I had no plan or what was going into my bags. 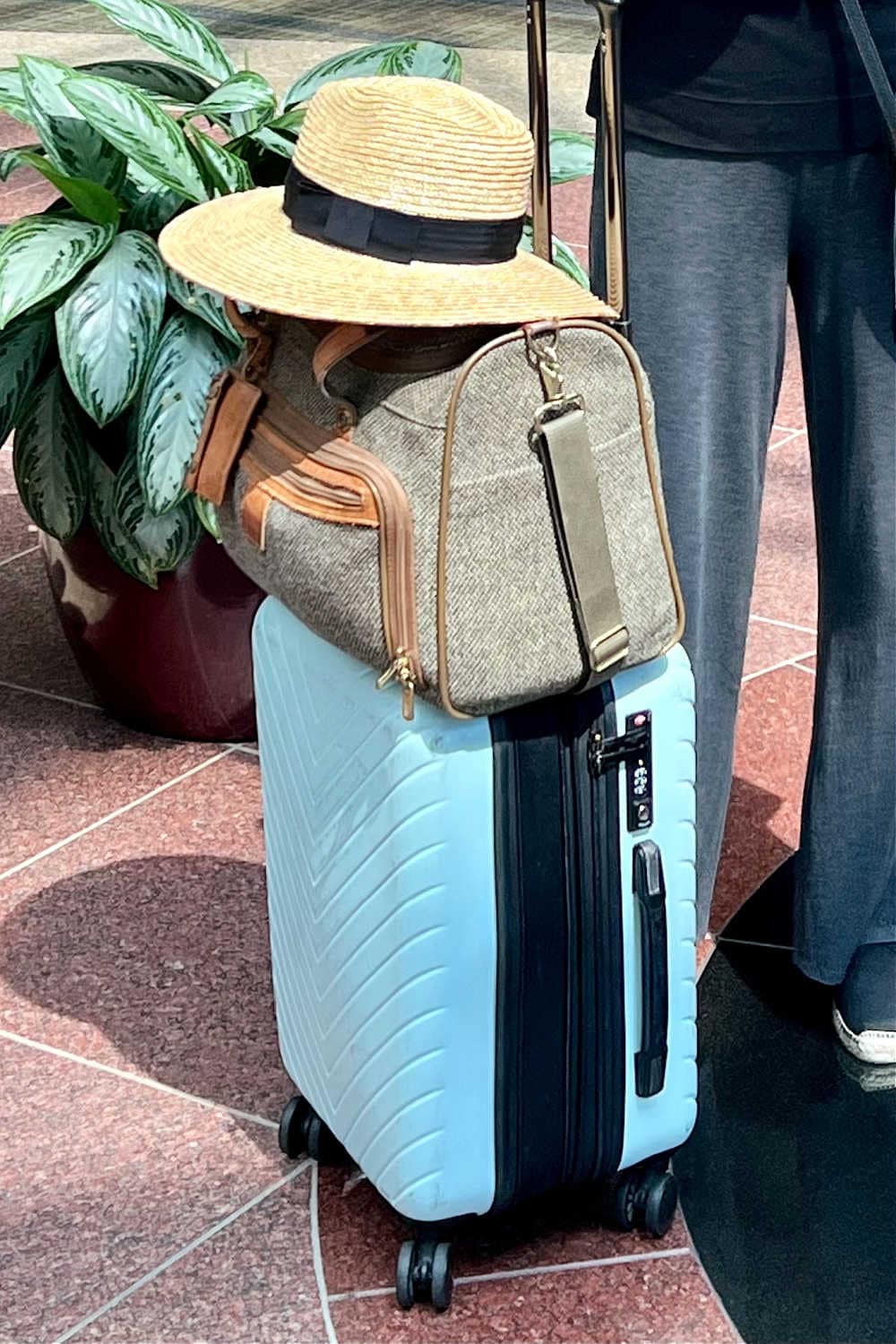 I know there is plenty of gray, black, and, I suspect, more black. I’d ordered a new carry-on because I thought it was larger than this blue dinosaur, but it turned out to be smaller. Ugh, best-laid plans. The vintage Hartmann personal item on top is at least 40 years old and is fading fast, but the shape is perfect.

Have I ever mentioned how much I dislike flying? The meal service on flights has deteriorated to an abysmal level. For a 5 hour flight over dinner time, I had access to one cookie which I couldn’t eat because it was loaded with gluten. Yikes! We were one row behind first class and got to live vicariously through their first-class meals, complete with white fabric napkins and fawning service. They quickly ran out of tasteless Chardonnay and club soda in coach. 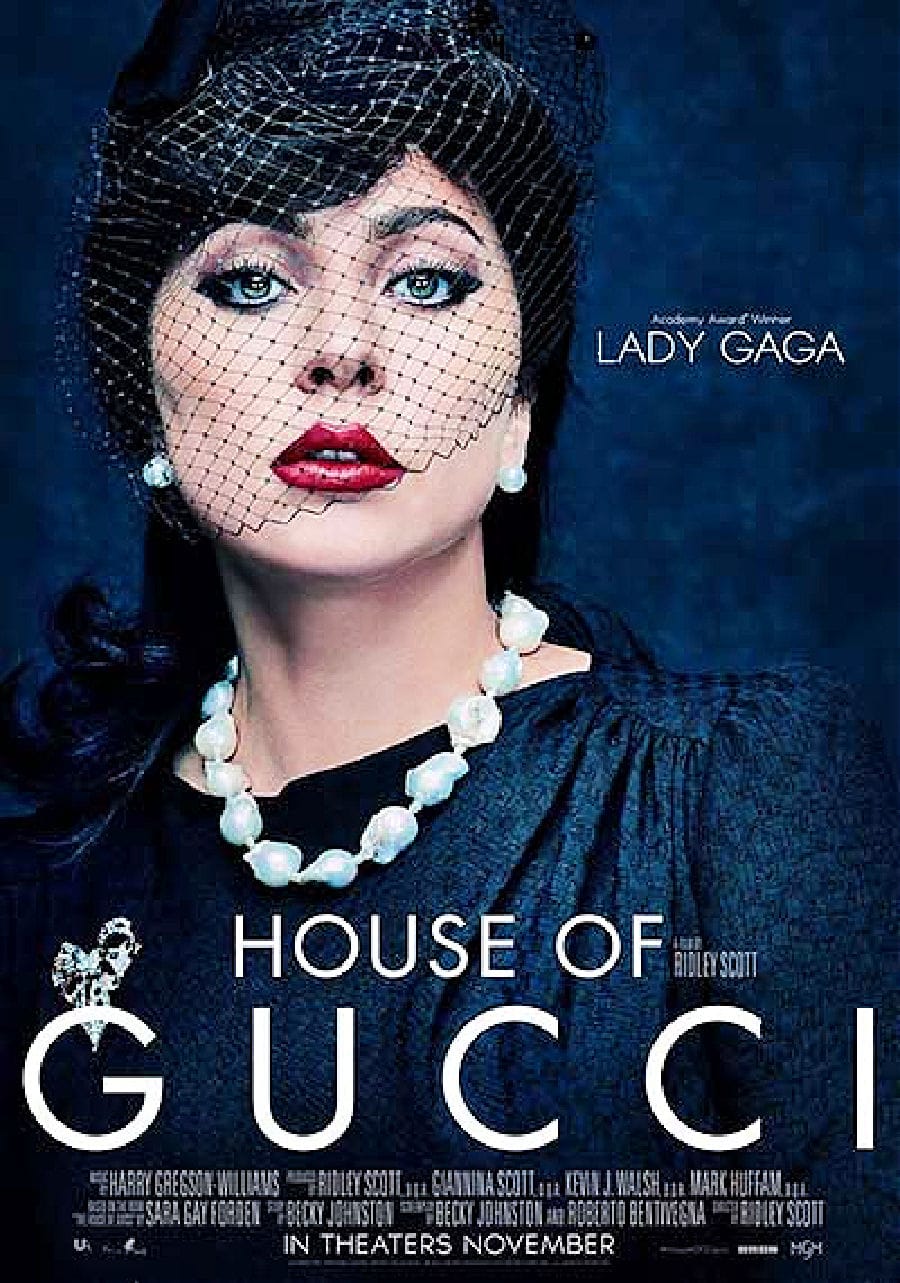 I watched The House of Gucci on my phone, which I’ve been anxious to see. It did not disappoint! I had no recollection that Maurizio Gucci was murdered. If you haven’t seen it, I recommend it.

The pearls in this movie poster have a personal story behind them. When I spotted this photo last year, I became obsessed with the baroque pearl necklace Lady Gaga is wearing. I love pearls of all kinds but have a growing appreciation for baroque ones. Their irregular non-spherical shape feels a bit less fussy than perfect ones, and their slightly edgy quality feels more modern to me.

I wanted one, so I shopped both on foot and online for a strand. The price varied widely, and so did the luster. The beauty of a real pearl for me is its luster, so I asked the Freshwater Pearl Company if they could make me one, and wow, did they ever deliver!

When my pearls arrived, I was blown away! They’re more magnificent than I expected. It’s a huge statement piece, and I adore it! The owner, Brian, liked the way it turned out, so he made a few more. Out of curiosity, he put one out at a street fair in Palm Springs and sold it in ten minutes, which confirmed for me that this was a winner.

I messaged Brian on Wednesday and told him I’d be wearing mine on this trip, so it would be showing up in my photos. Since I usually share links to what I’m wearing, he decided to put the remaining two up on his website and offer my readers a 15% discount with the code AWSL! Apparently, the discount works site-wide too. Then, Brian really made my day. He told me he named it the Jennifer necklace because it had been my idea. I’ve never had anything named after me, so that’s pretty cool.

Here’s the obligatory bathroom selfie while we waited and waited between flights 🙂 The smears you see are in the mirror, not me.

I wear tiny or no earrings with this necklace because it takes center stage, as it should. BTW- this is not a sponsored post. It’s just me sharing the most amazing necklace from a really thoughtful company.

The weather is predicted to be rainy and wet for our trip, which I am slightly prepared for. I don’t own a slicker, and wish I did…but the ship promises to have umbrellas, so it’s all good.

Thirty minutes after we took this photo, we were treated to the most amazing thunder, lightning, and rainstorm. It was glorious! We don’t get that kind of thing where we live in California, so it felt like a treat to me. I got two days of wear out of these jersey pants, which is how I will stretch my wardrobe…and yes, the suitcase is a sea of black and gray 🙂

You can file this under I thought I’d seen it all. I’m a bit of a stickler about table manners. My mom spent a fair amount of time making sure my brothers and I learned and practiced proper table manners. I’ve always believed our manners speak loud and clear…often louder than our clothes. As we sat enjoying breakfast yesterday, I spotted a family across the room, doing the same. I noticed them because the teenage son was leaning so far over his plate, that his nose was almost on it. 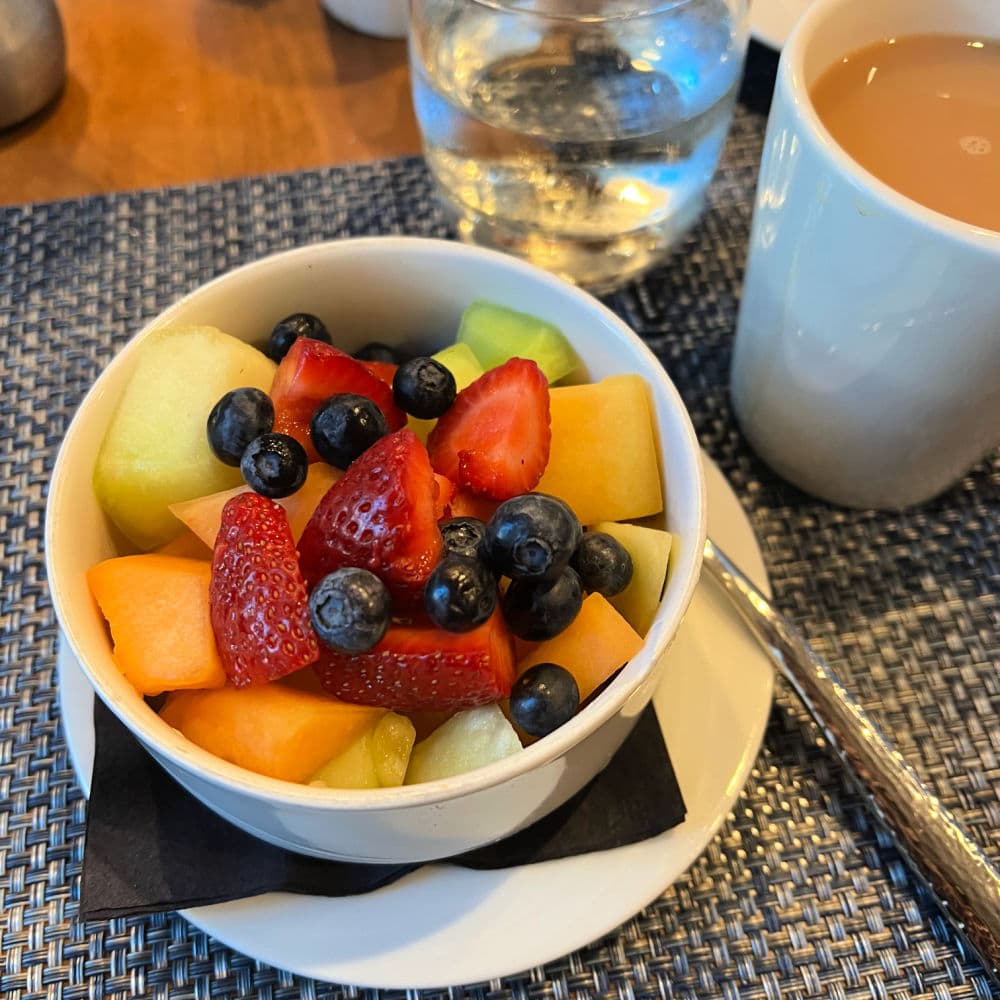 Mom and dad were sitting fairly upright. Then the young man leaned over, not once, but several times and ate food directly off the plate the way a horse does by grabbing it his lips. I have to admit that I was blown away. I felt so badly for this young man because his parents were not teaching him proper table manners. I know many parents have a low-key way of raising their children, but I think they are doing him a disservice.

How far in advance do you pack?

Thanks for reading, and be sure to wear what makes you feel confident.

This article was originally published by Awellstyledlife.com. Read the original article here.
Previous Post Sustainable Fashion: New Ways to Wear Old Clothes
Next Post 'How I (Finally) Learned To Let Go on a Weekend Adventure—And the Vehicle that Made It Possible'

Would You Wear It- Chevron Knit