The closer Better Call Saul is to its end, the closer you should be looking into connections between its world and its real-life predecessor Breaking Bad (although it’s technically both a prologue and epilogue). From minute details like Saul Goodman’s (Bob Odenkirk) Cadillac DeVille from Breaking Bad being repossessed at the start of the season to Walter White (Bryan Cranston) and Jesse Pinkman (Aaron Paul) debuting in Better Call Saul to expand a pivotal Breaking Bad scene, Better Call Saul‘s sixth season has been the easter egg hunt diehards of both shows have been waiting to embark on. And in the series’ penultimate episode, “Waterworks,” two forgettable Breaking Bad characters (along with Jesse) help solve one of Better Call Saul’s biggest mysteries.

By nature, prequels can struggle sustaining suspense since audiences are typically aware of the fate of certain characters. Gus Fring’s (Giancarlo Esposito) final showdown with Better Call Saul standout Lalo Salamanca (Tony Dalton) in Season 6’s “Point and Shoot” was intense, but Gus dies in Breaking Bad, so the stakes weren’t as high. One of the brilliant ways the show’s co-creators, Vince Gilligan and Peter Gould, have kept even the most knowledgable Breaking Bad fans engaged is by making us fall in love with Kim Wexler (Rhea Seehorn), a character so central to Saul’s life, we’ve all been racking our brains about why we never see her in Breaking Bad. Luckily, we get an answer on her whereabouts during Breaking Bad, in part, thanks to two characters you’ve likely forgotten about: Christian “Combo” Ortega (Rodney Rush) and Emilio Koyama (John Koyama).

What happened to Emilio in Breaking Bad?

Emilio’s fate in Breaking Bad kept Walter Whtie in the meth (and being alive) business but also confirmed Kim’s Breaking Bad life. In Breaking Bad, Emilio is Jesse’s meth-dealing partner who is arrested in the same DEA raid Walter rides along for when he spots Jesse fleeing undetected. After Walt and Jesse unite, Walt uses his chemistry know-how to whip up a batch of meth that impresses Emilio’s cousin Domingo “Krazy-8” Molina (Maximino Arciniega) when Jesse brings him a sample. When Krazy-8, Jesse, and Emilio, who was free on bail, drive out to visit a half-naked Walt cooking up meth in the desert, Emilio recognizes him from the raid and believes he and Jesse set him up for the DEA raid.

To save himself from being killed by the enraged cousins, Walt offers to teach them his recipe inside of the RV. Unbeknowst to Emilio and Krazy-8, Walt wasn’t showing them how to make meth but instead putting together the proper chemicals necessary to produce a lethal gas that emanates after an explosive reaction that blinds the two killers, allowing Walt to escape and fatally lock them inside. The first Breaking Bad episode we see Emilio in is the last one we see him alive in until the second-to-last episode of Better Call Saul.

In “Waterworks,” Kim dejectedly leaves Saul’s law office, made famous in Breaking Bad , after the swindler lawyer indifferently signs the divorce papers she sorrowfully presents him. While exiting, the first client Saul sees is none other than Emilio himself. As the two pass each other on the threshold of Saul’s office, we get the first confirmation that Kim Wexler was around just before the events of Breaking Bad started. But, that fact gets drilled home moments later.

Who is Combo in Breaking Bad?

In Breaking Bad, Combo is Jesse’s longtime friend who briefly helps him sell meth with Walt before being gunned down by a rival gang in Season 2. Combo’s death matters little to Kim’s timeline. Still, his nefarious life becomes extremely significant when Jesse encounters Kim leaving Walt’s offices after Emilio enters and recognizes her from her work defending Combo. Likely when Kim was doing pro-bono work in Better Call Saul to reconnect to her altruistic reasons she became a lawyer, she came across an underage Combo who had just sacrilegiously stolen a baby Jesus figurine. So not only was Kim around just before Breaking Bad started, but Jesse, the person who convinced Walt to make Saul their lawyer, knew about her first. Combo’s life also confirms she helped keep the man who sold Jesse the exact RV that started Walt’s meth-cooking business that set the show in motion. 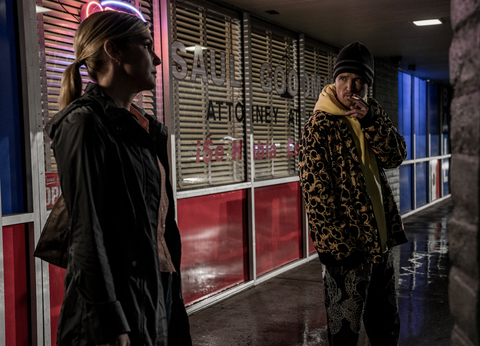 Unless the series finale changes things, Kim coming into contact with Emilio just before she moves to Florida confirms she does not physically make it into the Breaking Bad timeline. And the RV confirms she was still able to leave a lasting influence.