Latest:
Denmark’s Toned-Down World Cup Jerseys Are Designed to Protest Host Country Qatar The Newest Apple TV Device Is at Its Lowest Price Ever The 12 Best Fitness Watches That Will Optimize Any Workout Is it too Early to Think about Winter Biking?

What You Need to Know About the Power Snatch

There are few things more impressive in the fitness world than big-time barbell lifts. We’re not just talking about the typical trio of heavy maneuvers beloved by powerlifters, the bench, squat, and deadlift. These disciplines are all plenty impressive, but relatively simple, essentially requiring the athlete to do just one thing: move the load up and down, from A to B. What really turns heads are the more power-focused barbell exercises, the cleans, jerks, and snatches of the world. There’s a reason the Olympic lifts are considered to be in a league of their own: The combination of strength, power, and technique you need to pull them off properly are a world-class pursuit.

That said, you can’t train hard with the full-technique versions of the Olympic lifts, the snatch and the clean and jerk, for every single workout session. That’s where accessory exercises like the power snatch comes into play. Weightlifters use the power snatch to build the power and fluidity you’ll need for the traditional barbell snatch, along with honing the upper body mechanics needed to finish through each rep. Other disciplines that aren’t only focused on Oly weightlifting, like CrossFit and performance training, often feature this slightly pared-down version of the exercise in programming as a means to develop pulling power.

No matter why you decide to include the power snatch in your workout program, you’ll need to learn how to do the movement properly. This isn’t the type of thing you can expect to just walk up to the barbell and pull off right away; there are multiple phases of the lift for you to master. To execute great power snatches, it’s important to pay attention to the subtle details of this exercise as they’ll help to maximize the benefits for technique work and physical adaptations.

Personally, I like to use power snatches in my programming when I want to build snatch pulling power. Plus, the power snatch variation is not as technically driven as the traditional snatch, which requires a deeper squat under the loaded barbell, so the variation is a tad easier to program more regularly.

Let’s break down how to perform muscle snatches, muscle snatch benefits for your training plan, and common muscle snatch mistakes so you can determine whether the exercise is right for you.

How to Do the Power Snatch

When performing and programming power snatches, you’ll generally want to use lighter weights than you would doing full snatches. Since we’re catching the weight higher, we have less time to get under the barbell, so lighter loads are usually prescribed for this exercise. The percentage of weight used will be contextual towards your training goals, needs, and skill level.

There are a few key benefits that come along with the power snatch and these benefits will be contextual based on your needs and application of this exercise.

If you’re newer to snatching and you have trouble being patient with your final pull and punch, then the power snatch can be a great tool to help teach you patience with your snatch.

Since we’re actively trying to finish in a taller/higher catching position in regard to the hips, we’re going to be forced to be hyper-cognizant of what’s going on during the final 30 percent of our pull in relation to our speed under the barbell, a.k.a. improving the authority of our turnover positioning.

For the small subsection of lifters that want to perform snatch variations without doing full snatches, the power snatch can be a good option. This is often why we’ll see the exercise programmed into functional fitness workouts and collegiate training settings.

Power snatches are loaded lighter than traditional snatches, don’t require nearly as much technical focus throughout the full kinetic chain, and are still challenging to achieve some upper body pulling benefits.

The Most Common Power Snatch Mistakes 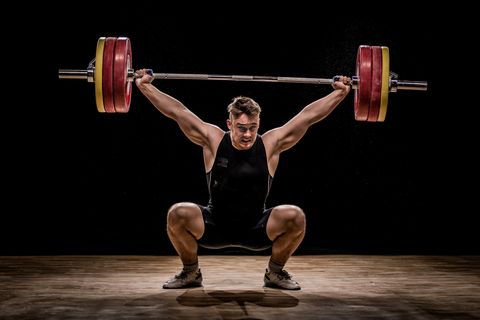 There are two common power snatch mistakes that beginners and non weightlifting-focused athletes tend to make with the muscle snatch.

1. Going Too Heavy—Power or Nah?

The first and common mistake is going too heavy. If you’re having to bend and catch the weight in a full snatch position (below a parallel squat position), then what you’re really doing is a snatch. That being said, this is why it’s important to let your skill and current strength dictate the load of this exercise to ensure you’re catching the weight high enough.

If you’re not performing power snatches with a clear intent of catching them in a taller position, then you won’t be getting the full benefit that they can provide in regard to power production.

On top of going too heavy, another mistake you’ll see with the power snatch is rushing the turnover of the pull. This will present itself as a lifter breaking at the arms far too soon, then being in a position where their mechanics are disadvantaged to finish the turnover with a taller catching position.

It’s important to remember with power snatches to make the primary intent being strong fast with the second pull and turnover phase, then actively focusing on catching the weight slightly higher than traditional snatches.

When performing power snatches, remember to let your abilities dictate the load on the bar. If you’re having to bend to catch weight, then you’re not getting the full benefit of this exercise.

Power snatches are awesome for working second pull and turnover technique in the snatch and can also be a great snatch variation for non-weightlifting athletes that want to practice this movement, but not dive into full snatches.

Jake Boly, MS CSCS, is the Co-Founder of Pheasyque Lab, That Fit Friend, and works as a consultant for other fitness professionals trying to build websites and brands.

Brett Williams, a fitness editor at Men’s Health, is a NASM-CPT certified trainer and former pro football player and tech reporter who splits his workout time between strength and conditioning training, martial arts, and running. You can find his work elsewhere at Mashable, Thrillist, and other outlets.