Dating With Psoriasis: How I Did It

In college in 2018, it started off looking like dandruff. “I had flakes falling off of my head all the time,” says Austin Tolchin, a 26-year-old who currently lives in Washington, DC. None of the dandruff shampoos helped at all. But he brushed it off — just an annoying phase, he thought. Hopefully, no one would notice.

A year or so later, in graduate school in D.C., Tolchin’s “dandruff” was still there. While he tried to ignore it, in the back of his mind, he wondered: Will I be able to meet anyone if this is the first thing people notice?

Then, he found a huge red sore on his leg. Thinking it was a rash, he also assumed it would go away on its own. Like many guys in their early 20s, Tolchin didn’t have a regular doctor he could turn to. But his skin issues weren’t going away. In fact, the sores spread — showing up on his arms and his other leg.

It was enough to land him in a D.C. dermatologist’s office with a diagnosis: plaque psoriasis — the most common form of the chronic skin and autoimmune condition that impacts about 7.5 million people in the U.S.

Tolchin’s doctor prescribed an oral medication that he soon found out wasn’t covered by his insurance — and cost a cool $4,200 a month without insurance. He was able to join the manufacturer’s bridge program where he received free medication from the manufacturer and started to see his skin clear. He was taking better care of himself, eating right, and being mindful about exercise and outdoor time, but he only qualified for the free meds for a few months. When he had to stop them, his psoriasis came roaring back.

“I had psoriasis all over my hands, face, arms, and chest. I just didn’t feel good about myself at all. It was demoralizing.” 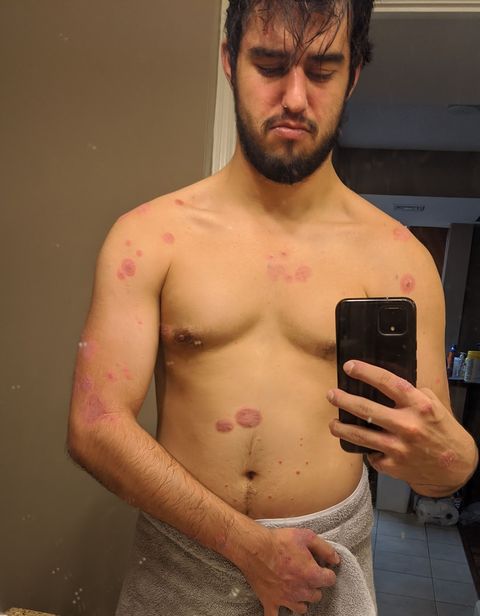 While it can begin at any age, psoriasis has two peak onset ages, research published in JAMA suggests— one being 20 to 30 years, a time when many people are actively dating.

And Tolchin’s psoriasis affected his wanting to go out. “I wouldn’t want to wear anything except a hoodie and pants.” He had started to ride his bike throughout D.C. but on many days, he couldn’t. “My hands would start bleeding in the middle of the ride because the sores would open up.” During this time, he wasn’t putting himself out there much to meet someone. “I was so concerned about how someone would like me with this going on.”

How he brought it up

Despite not looking for a relationship, he did start dating someone. They had been friends for a while and when his skin flared up, he told her about his psoriasis. “I was just as upfront as I could be about it. I told her I wasn’t sure what was going on and that while I was trying my best to make this better, it might never get better,” he says. Psoriasis is, after all, an incurable disease.

She was concerned and supportive, talked things through with him, and did her own research, helping him to keep up with healthy habits. But his insecurities remained.

Some days, he’d itch so much he’d make himself bleed. In some ways, he didn’t want to stop going out and doing the things he enjoyed, but in others his mindset was nervous. “I knew that this wasn’t necessarily attractive,” he says.

Before other dates, he remembers getting out of the shower, looking in the mirror, and being “disgusted” with what he saw. He’d cancel plans. He’d try to cover up. He’d constantly wonder: How can someone look at me right now? How can someone even remotely be attracted to this?

“Before hanging out with her there were definitely a lot of struggles. Once I was with her, I would forget about everything else,” he says.

Tolchin often found himself pumping himself up or trying to switch his mindset before going out. “I tried to let myself feel everything I was going through while also knowing that I still was who I was. This might be something that I live with but it doesn’t define who I am,” he says.

While he knew that the right person would support him through his psoriasis, he also “kind of tried to figure out how to make the rest of myself attractive.” In his girlfriend, he found a teammate.

In the past year, Tolchin has found a new doctor in D.C., gotten back on medication, and has seen his psoriasis clear tremendously. “Sometimes it’s not there and other times it’s just a couple of spots in my legs.”

Tolchin and his girlfriend have now been together for about three years. He says that they are “mostly past” all of the worry and stress around his psoriasis and he encourages young men who are trying to date to keep being themselves and doing what they love — regardless of what’s going on with their skin. 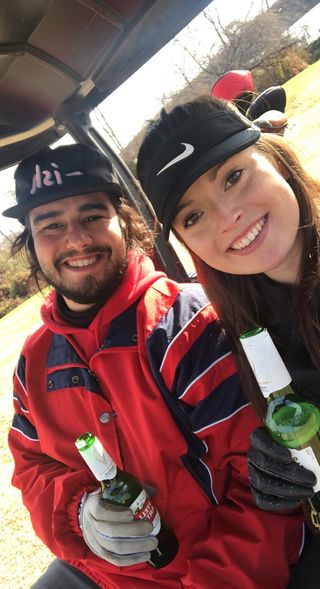 Recently, Tolchin has connected with the National Psoriasis Foundation, raising money and participating in a 56-mile bike ride in Virginia. When he posted about his diagnosis and his race on Instagram, it was met with overwhelming encouragement both by those who knew him well and those who didn’t. Talking openly about the condition — and connecting with others who have it — felt freeing.

“The right people will stick with you. Hiding is sometimes possible but there are also points where it’s not possible,” he says. “The amount of support I have received from the people I care about after being open about my psoriasis is incredible.”

Cassie Shortsleeve is a skilled freelance writer and editor with almost a decade of experience reporting on all things health, fitness, and travel. A former Shape and Men’s Health editor, her work has also been published in Women’s Health, SELF, Runner’s World, Men’s Journal, CNTraveler.com, and other national print and digital publications. When she’s not writing, you’ll find her drinking coffee or running around her hometown of Boston.