Lord of the Rings, and its prequel novel The Hobbit, both received strong movie adaptations; it’s safe to say those live-action films from director Peter Jackson won’t be overshadowed anytime soon. The movies are an example of how faithful adaptations of literature can keep devoted fans of an almost 70-year-old book series glued to the silver screen, and even gain some new fans along the way. Both the beloved series and movies have longevity because of their top quality, even all these years later. There’s no need to mess with (near) perfection.

So if someone wanted to continue telling the Lord of the Rings story, the best way to do it without alienating fans would be to tell new stories. The Rings of Power is Prime Video’s newest fantasy television series set in the world of Lord of the Rings, but rather than go into the future and try and predict what came after the book series, The Rings of Power goes back. Way back. Think thousands of years back.

Much like House of the Dragon, The Rings of Power hopes to tell a brand new story, while giving fans of both the book series and movies breadcrumbs leading up to the battle between good and evil Tolkien wrote about decades ago.

What Book Is Lord of the Rings: The Rings of Power Based on?

The Rings of Power takes place in the Second Age of Middle-earth and follows both new characters and ones we see thousands of years later in Tolkien’s trilogy. If you want to read the story of what goes on in the new Prime Video show, you’re out of luck. 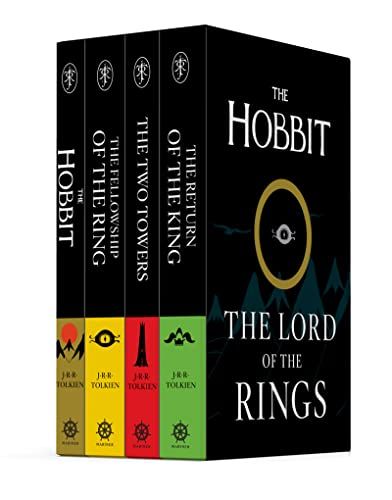 Mariner Books The Hobbit and The Lord of the Rings Boxed Set: The Hobbit / The Fellowship of the Ring / The Two Towers / The Return of the King

The Rings of Power are actually mentioned in the appendices of Lord of the Rings. According to Vulture, the creators of the show closely read Tolkien’s work and had to make deductions to understand the intricacies of everything that went on before the events of the trilogy, which took place in Middle-earth’s Third Age.

“Tolkien talked about not creating Middle-earth but excavating it. We felt like we were discovering things that were already there,” J.D. Payne, one of the co-creators, told Vulture. “People have heard about it in montages and flashes, but these are massive untold stories.”

So for the sake of the show, there will most likely be parts of the overall story taken from Tolkien’s timeline, but individual characters and smaller storylines will be wholly new. Prepare yourself if you’re a Tolkien fan—you’ll be in uncharted territory.

This article was originally published by Menshealth.com. Read the original article here.
Previous Post FDA Warns of Dangers From Skin Lightening Creams
Next Post Labor Day Sale picks from a few of our favorite brands