Although she grew up near Boston, runner Shalane Flanagan chose New York City for her first marathon in 2010—then won that race just seven years later, ending a 40-year drought for American women in the open division.

But that wasn’t even her favorite marathon in the Big Apple.

“Of course, the win was monumental for me, my family, and my team. But it was 2021, when I ran six marathons in six weeks with the last one being New York, that stood out the most,” says the 41-year-old Flanagan, who is a Mastercard Global Ambassador. She’s part of a roster of athletes extending the company’s commitment to building its health and wellness platform. “Being able to come back to the course after the Covid-19 pandemic in the nation, the world, and New York City was incredible. It was a celebration of health and fitness and everyone being together again, and that was truly priceless.”

“No race is like the TCS New York City Marathon.”

That’s far from Flanagan’s only priceless NYC moment. The marathon has offered her many over the years, from being at the start line and listening to the city’s unofficial anthem played over the loudspeakers, to having fans on the route cheering so vigorously it made her body shake as she ran, to seeing her toddler son at the finish line in 2021. All of these experiences and more have cemented her belief that there truly is no race like the TCS New York City Marathon. And that’s coming from a runner who has an Olympic silver medal.

Here, Flanagan shares her top tips for making this one-of-a-kind race equally memorable for yourself, regardless of your running pedigree or placing.

Flanagan’s top advice isn’t about training, nutrition, or pacing strategies, although those are all part of race prep. Rather, it’s mindset. She emphasizes that establishing your purpose before getting to the start line is what will fuel you in the tough moments. That might mean having 26 different reasons for why you run, so you can think of one per mile, or one huge motive that can sustain you the whole race—either way, she suggests developing a solid answer to the question, Why am I running?

“Maybe it’s to inspire your kids, or for your health, or to feel a sense of accomplishment,” she says. “There are so many meaningful, personal reasons that come with running. Dig deep and have an arsenal of ‘whys,’ because you’ll need those when you feel unmotivated to keep going.” 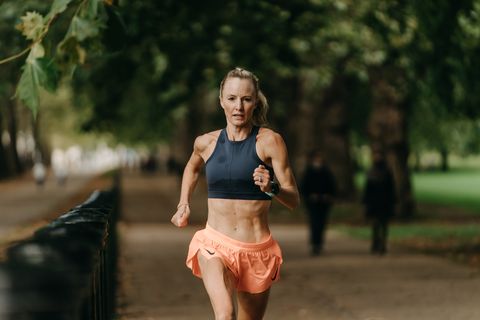 The best way to maximize your race experience is to participate in the events surrounding the marathon, especially the ones open to the Priceless Experiences available to registered Mastercard cardholders, such as:

Connections with Shalane Flanagan: Aside from the three virtual training sessions that led up to the marathon on October 23, there’s also an invite-only meet and greet in New York City on Saturday, November 5.

Marathon Expo: Stop by the Mastercard booth for Priceless surprises.

Cheer Zone: Have your ardent supporters watch the race from the Mastercard Cheer Zones at Mile 8 and Mile 16.

Priceless Start: Your exclusive ticket to starting the race ahead of the pack, just like the elite runners. Access this competitive perk for 2023 at Priceless.com.

If the marathon is just a couple weeks away, you’ve likely already had your longest training run. But if you’re eyeing NYC for 2023, Flanagan’s advice is to make the most of those longer runs in the months leading up to the race.

“The cornerstone of marathon training is those long runs,” she says. “Those are dress rehearsals for the race. That’s when you can dial in your nutrition, hydration, recovery, and even clothing.” Flanagan says testing out options like shorts and arm sleeves can be a boon for minimizing chafing and keeping your body temperature regulated on race day. This is also when you can determine what works best for a warmup, she adds. For instance, you might do better with an easy, five-minute jog and some deep breathing than a complex series of dynamic stretches.

Experimenting with these variables will help you understand what works best for you on a run that extends over hours. You might find in training that you need some type of energy gel to get past mile 15, or that you have more muscle soreness when you don’t properly hydrate the day before a long run. Another advantage to the dress rehearsal: It can help reduce pre-race jitters, since you know you’ve got a plan that’s tailored specifically for you.

Unless you’re the type who loves being surprised by twists, turns, and hills along a race route, Flanagan suggests taking a close look at the course so you know what to expect. For example, she says the four bridges you cross during the NYC Marathon—Verrazzano-Narrows, Ed Koch Queensboro, Pulaski, and Willis Avenue—are the only significant hills you’ll face, which may be a relief if you don’t know the terrain well. You’ll also learn that once you hit Central Park, it’s only about 5K to the finish line.

“I love to study a marathon map because you can visualize in advance what it’s going to entail,” she says, adding that knowing the major milestones can help give you a sense of progress during the race.

Stay focused on where you are

Despite cheering fans, amazing city views, and the sense of camaraderie that comes from being around thousands of other runners, you might still hit a wall at some point. That could be mile seven, mile 20, or even within sight of the finish line.

Flanagan knows that feeling well—she had to stop and walk in one marathon only 800 meters from the end, an experience she calls humbling. Counteracting the desire to quit often comes down to focusing on what’s just ahead. 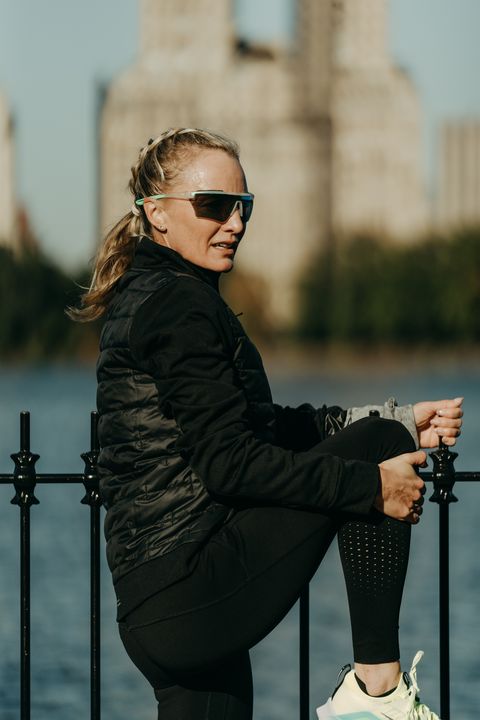 “In a marathon, much like in life, looking too far ahead can be overwhelming,” she says. “If you’re thinking of how much you have left, it can be too much. Instead, try to live within the mile you’re in. Think about the one block you’re passing, or making it to the next water station, or to your friend at mile 23. That breaks the marathon down into tangible bites you can accomplish.”

If you’re wearing one of the 250 contactless Tap & Go Race Bibs available to select cardholders and runners, you can use it to support small businesses with purchases like a pre-race coffee or post-race slice of pizza.

Another tip for avoiding a late-race crash: Don’t go out too fast. It’s common to be excited at the start of a race and let nerves drive your pace, but Flanagan says that can burn you out before the end. She suggests keeping an easier pace for the first half of the race and then slowly increasing your speed after that.

Most of all, Flanagan says, enjoy the race. That might seem obvious, but it can be all too easy to get wrapped up in your pace and clocking each mile with a grim determination. “Absolutely soak up the experience, let it into your heart,” she says. “It’s a thrilling race. You run through all five boroughs, you have amazing support all along the way, and there’s such a connection to the city and the people.”

Just thinking of the start line—with music playing, American flags waving, and a booming cannon fired instead of a gun as a kickoff—gives Flanagan chills. Even then, when she’s 26.2 miles from the finish, she’s already stacking up appreciation of all the priceless minutes to come. Flanagan suggests taking advantage of the Priceless Start, if you can. It allows you a head start on the Verrazzano-Narrows Bridge, just like the marathon’s elites, starting their journey to the finish line long before the masses take off.

“It’s such a fun and unique experience,” she says. “There’s nothing like the New York City Marathon. Be in that moment.”

This year Mastercard is helping make the TCS New York City Marathon priceless for runners and spectators. Go to priceless.com to see the events occurring before, during, and after the race on November 6, 2022.

Elizabeth Millard is a freelance writer focusing on health, wellness, fitness, and food.

This article was originally published by Menshealth.com. Read the original article here.
Previous Post Black Americans Less Likely to Receive Lifesaving CPR: Study
Next Post All the Stars Got Dressed Up for the Black Panther 2 Premiere

5 Protein Powders to Help You Hit Your Weight Loss Goals

CHRISTMAS GIFTS FOR THE HOMEBODY

5 Protein Powders to Help You Hit Your Weight Loss Goals