Everything We Know About House of the Dragon Season 2

For all our grumbling about House of the Dragon’s first season—its elongated windup to events obvious from the jump, its textbook-plotted storyline, its delay of all things interesting and consequential—we have to say: when Ramin Djawadi’s score kicks in each week, we’re just happy to get another hour in Westeros. It takes us back to a simpler time, when we were sweet summer children in the spring of 2011. May the franchise go on. May it last generations and always give us something to complain about.

By now, as we wrap up Episode 10 and Season 1, the long-awaited civil war, the “Dance of the Dragons” has finally finally finally almost just about begun. While we thought the conflict between Aegon II and Rhaenyra over Viserys’ vacant throne would be more of a centerpiece to the season, we’ve instead come to see the show’s slower arc: Season 1, like a prologue of sorts, merely sets the stage for the two-year war that will decide the King of Westeros. (If you want to avoid Season 2 spoilers, stay away from articles summarizing the Dance of the Dragons.)

With such deliberate pacing, House of the Dragon seems poised for at least one more season and possibly more. It’s worth remembering that the events of the series, even after the time jumps, still puts the date over one hundred years before Daenerys Targaryen is even born—allowing for decades more of Targaryen drama, inbreeding, and dramatic conversation-ending hmmms.

Here’s what we know about the future of the series.

Is House of the Dragon Returning for Season 2?

Is milk of the poppy the best remedy for a king’s pain? The answer is yes.

Shortly after the premiere, HBO announced its plans to renew the series for a second season, noting its almost instant popularity; the series brought in the largest new series audience in HBO’s history. (But can we really call it a new series?)

There are also rumors the series will continue past Season 2 and into Season 3—rumors stoked by its star Matt Smith, who let plans slip on an episode of the Happy Sad Confused podcast for after the Episode 6 time jump: “Once we make the jump, we’re in. I’m pretty sure from then on there’s not any big huge time jumps, particularly next season and the one after.”

The one after. Hell yes.

When Will House of the Dragon Season 2 Come Out?

The UK’s BT reported that production on Season 2 has begun, with filming expected to begin in the summer of 2023. Other sources have reported that filming may begin in the spring. Filming for Season 1 began in April 2021, and the season then airing almost fifteen months later.

While there’s always the chance for a speedier Season 2 production, we’re not too optimistic.

What Will Season 2 Be About? 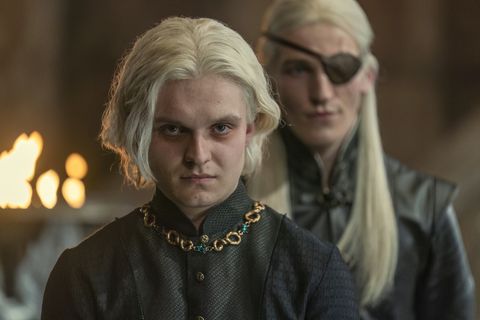 Thus far, the series has been working loosely off author George R.R. Martin’s doorstopper textbook Fire & Blood, a history book of sorts for Westeros and the Targaryens. The book includes all major events of Season 1 and the subsequent history, the events following the death of King Viserys I, including the ensuing civil war.

Season 2 will likely cover all or some of the next two years, 129-131 AC. That period will decide the successor to the Iron Throne. While it’s unclear how much of the civil war Season 2 will get through, we can likely expect, however, a more standard chronology, without time jumps. The characters and actors should be more or less set for the next season.

Who Will Return in Season 2?

Expect the same players as Season 1, representing the Targaryens, the Hightowers, and the Velaryons.

Season 2 is expected to also feature the Starks, with the northern family expected to play in important role in the upcoming civil war.

This article was originally published by Menshealth.com. Read the original article here.
Previous Post Danger, Death, and Disgust: Why You Just Can't Look Away
Next Post Damon Lindelof's 'Star Wars' Movie Is a Top Priority at Lucasfilm