LET’S FIRST DEAL with what usually needs to be dealt with. Our name—Ghetto Gastro—makes a lot of people uncomfortable.

It’s not our intent to polarize for the sake of ceremony. In fact, we were all young boys when we learned that our existence itself could be polarizing to folks who didn’t know us.

You recognize this unsettling feeling because you might not be sure if it’s polite to say the words Ghetto Gastro. (You can, and we hope you do. Watch out, though—say them three times fast and we just might run down on you. Ya dig?)

You feel this discomfort because you might have worked to get out of the ghetto, surviving difficult circumstances to create a more sustainable life. Or you might wonder why someone would be proud to claim an identifier that could sound off-putting to outsiders.

For us, ghetto means home. It’s a way to locate our people, not just in the Bronx of New York City, where we as a group formed. In the ghetto, food is a denominator of class and a reminder of what you can and can’t have.

Food is weaponized against people in the ghetto when they have easier access to soda and chips than to fresh produce. When subsidized commodities like sugar, wheat, and soy make buying oranges and greens unaffordable, something is deeply wrong. Weaponizing food against people is watching generation after generation fall to diabetes and cardiovascular disease. These are our people. And for decades they’ve been given an unfair shake.

But ghetto isn’t just about struggle and disenfranchisement. Ghetto is the flower blooming in the sidewalk cracks. Ghetto is our love language, a patois so specific and rooted in place that if you know, you can hear when someone is from the Bronx or Brooklyn or Harlem. Ghetto is our aura, our style.

Ghetto isn’t about excluding people. It’s about telling the rest of the world, We are here. We’ve been here. We’re going to serve what we feel like, especially when many fail to acknowledge our existence. 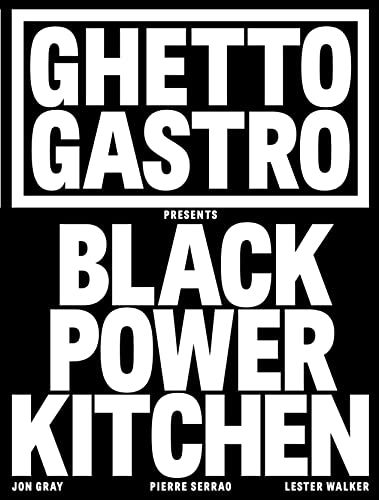 Ghetto Gastro is often described as a culinary collective, which is a little vague, we know. But we are a difficult crew to contain within boundaries. We started in 2012, throwing parties in N.Y.C. Jon has his roots in fashion and art. Pierre and Lester are formally trained chefs. We discovered that we had friends across creative industries who loved to dine, loved beautiful, interesting, thoughtful food but couldn’t find experiences that spoke to them. As our popularity grew, so did our mission.

We’ve found that we can be thoughtful about where we cook, what ingredients we select, how we describe a dish. We route funds back to our community in the form of mutual aid. We’ve partnered to sell limited runs of specialty items and big pushes of cookware appliances.

We’re building a retail-food brand, Gastronomical, using plant-based ingredients that originate in Africa, Asia, and the Americas, the ancestral roots of the cultures that enrich us. We’re not just trying to sell people stuff. We are intentional with what we do, when we do it, and who we do it with.

While we know that not everyone can access our products, we want the people from our community and from communities like ours to know that they deserve fun things just like anyone else.

Money itself is not our aspiration. In our worldview, everybody eats.

These three recipes showcase that.

We pay homage to the Black Panther Party’s groundbreaking community-based free breakfast program. The mix of cocoa powder and coconut creates a slightly nutty, mild flavor. It’s not too rich or sweet and makes a moist waffle. 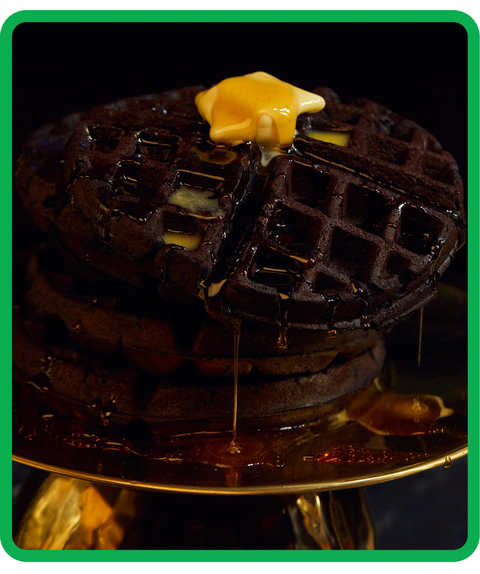 1. In a large bowl, whisk the flour, cocoa powder, shredded coconut, sugar, salt, and baking soda. Make a well in the center. Set aside.

2. In a medium saucepan, warm the coconut milk and coconut oil over
low heat until the temp reaches 110°F. Remove from the heat; whisk in the yeast. Allow the yeast to bloom for 10 minutes, till bubbling on the surface.

3. Add the eggs, chocolate syrup, and food gel (if using) and whisk thoroughly for about 30 seconds, until thickened slightly. Pour the coconut-milk mixture into the well in the flour mixture. Whisk to make a smooth batter, switching to a rubber spatula as it thickens. Add the warm water and mix. Allow to sit at room temp for 15 to 30 minutes. The longer the batter rests, the fluffier the waffle.

4. Prep a waffle iron according to the manufacturer’s instructions. Make the waffles according to the iron’s specifications. Stack the waffles on a plate as you make them
and cover with a clean, dry dish towel to keep warm. Serve with your preferred butter, sorghum syrup, banana, or vanilla or coconut ice cream (or any combination that rocks your world). Makes 4 to 6 waffles

If you grow up in the north Bronx, Caribbean cuisine and culture are part of the tapestry. Bronx by way of the Caribbean is, of course, the result of merged food influences from African and Indigenous cultures in the islands and Indian cooking traditions. This homage is something a little Trini, a little BX, and a lotta bliss. 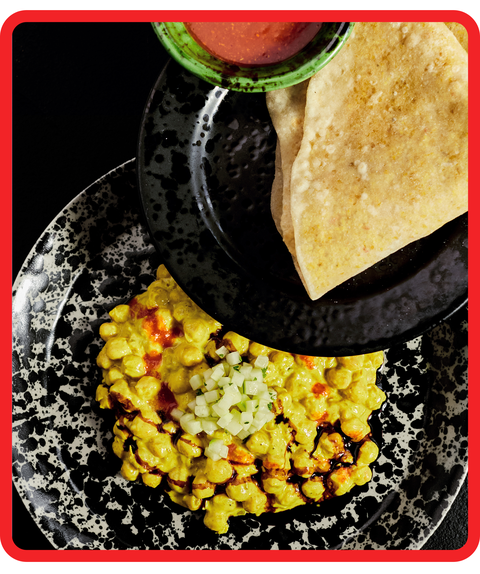 1. In a mortar or blender, combine the onion, ginger, curry powder, miso, lemon grass, Scotch bonnet, coconut sugar (if using), and cumin seeds and blend into a paste. Set aside.

2. In a medium pot over high, add a quarter of the coconut milk. Allow the liquid to evaporate and let the milk reduce until you see thick bubbles. Stir in the curry paste you made earlier and cook until a sauce begins to form. Lower the heat as necessary to avoid burning.

3. Stir in the chickpeas and the remain-ing coconut milk. Cover the pot, reduce the heat to medium low, and simmer, stirring occasionally, for 30 minutes or until the liquid has reduced by half. Season with salt to taste. Serve with store-bought roti or rice. Makes 4 servings

The insider’s joke about jollof is that its many fans debate who deserves credit for bringing us this perfect mix of rice, tomatoes, peppers, and spice. We’re not about to weigh in on the so-called jollof wars, but we’re inspired by all approaches. 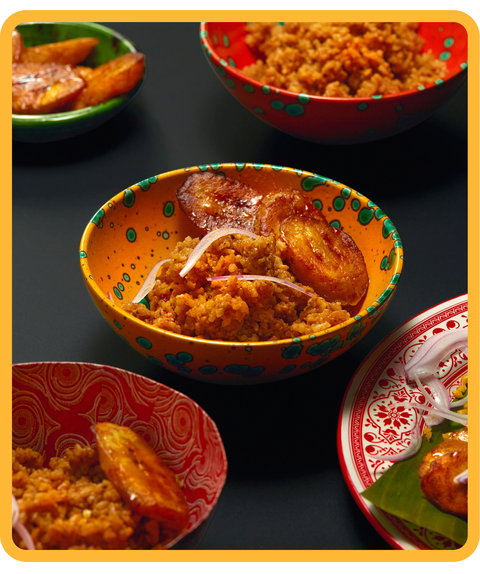 1. In a medium saucepan, heat 1⁄2 cup grapeseed oil over high. When the oil starts to smoke, add the tomatoes and sizzle, about 5 minutes. Flip and cook till they begin to break down.

2. In a medium bowl, add the bell pepper and onion and toss with 2 Tbsp of the oil.

5. Transfer the mix to a blender and blitz to a smooth paste. Add a little water and blitz again. Strain through a sieve into a container.

6. In a cast-iron pan, add the rice, mushroom broth, and 1⁄2 cup of the strained sauce. Cover and simmer for 18 to 20 minutes, until the rice is cooked. Remove from the heat and rest, covered, for 10 minutes. Serve with roasted vegetables or fried sweet plantains. Makes 6 to 8 servings

A version of this article appeared in the October 2022 issue of Men’s Health.

Ghetto Gastro is an NYC-based culinary collective that began in 2012 and includes Jon Gray, Pierre Serrao, and Lester Walker.

This article was originally published by Menshealth.com. Read the original article here.
Previous Post Is It Flu, RSV or COVID? Experts Fear the ‘Tripledemic’
Next Post Fall Nail Colors: It's Time to Treat Your Fingers to an Autumn-Ready Manicure