When you have a great workout, you want to document it, which is totally fair— you earned that moment. Well, Julianne Hough just hit up a Barry’s Bootcamp class in the UK, and she snapped a pic for proof.

Hough included the pic on her Instagram Story, showing herself and actress Maude Hirst posing at a class together. The image shows the 34-year-old in the class wearing black leggings and a black sports bra, with her chiseled, six-pack abs on full display. “Let’s go @barrysuk,” she wrote over top.

Barry’s Bootcamp, in case you’re not familiar with it, is a strength and cardio interval workout that bills itself as “the best workout in the world.” Classes alternate between workouts with weights and running on a treadmill, with each day focusing on different muscle groups to help you achieve next-level tone while also getting that HR up.

In the pic, it looks like Hough hasn’t started the class yet, but she and Maude are setting up to hit the weights for the first round. 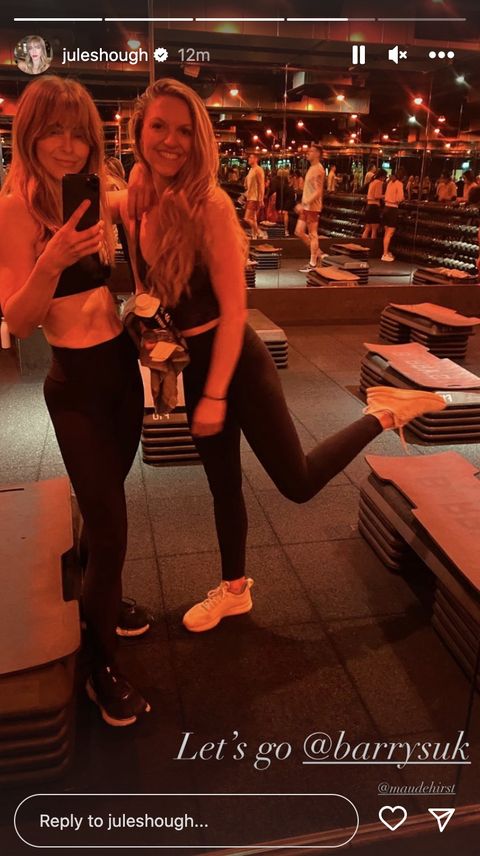 Julianne Hough at Barry’s Bootcamp in the UK.

Naturally, Hough doesn’t just do Barry’s Bootcamp. In fact, she does a lot. For starters, she likes to work up a sweat by dancing—she’s a professional, after all. Check out her busting a move like it’s NBD:

She’s also deep into Pilates and has shared plenty of snippets of herself moving through various exercises, including squats while holding a Pilates ring and core work on the reformer. She even has a video on YouTube of herself doing a “dancer’s body” Pilates workout, just in case you want to check it out.

Hough loves exercise so much that she’s even created her own fitness platform called KINRGY. These classes borrow from tai chi, qigong, energy work, strength training, and cardio for cool workouts that are fun to follow.

On the food front, Hough follows a vegan and gluten-free diet. “My body needs it,” she said in a “What I Eat in a Day” video with Harper’s Bazaar. “Because trust me, do I love flour, I love sugar, I love cookies, I love all the things. But I’m really just trying to focus on my health from the inside out.”

Typically, she’ll start her day with some lemon water, followed by celery juice before she works out. Lunch will be soup and a salad, and it really depends for dinner. One of her favorites is a lentil-based Indian dish called mung dal that she’ll have with gluten-free crackers, toasted black sesame seeds, and vegetable sides like sweet potato, asparagus, ginger, collard greens, Swiss chard, and spinach. “This is really nourishing, really yummy, I feel really full by the end of it,” she said.

Korin Miller is a freelance writer specializing in general wellness, sexual health and relationships, and lifestyle trends, with work appearing in Men’s Health, Women’s Health, Self, Glamour, and more. She has a master’s degree from American University, lives by the beach, and hopes to own a teacup pig and taco truck one day.

This article was originally published by Menshealth.com. Read the original article here.
Previous Post Is It Dry Skin or Atopic Dermatitis?
Next Post BTS Is Taking a Break From Running Pop Music to Enlist in the South Korea Military