That House of the Dragon in Season 1 Episode 9 Foot Scene, Explained

House of the Dragon is a show where just about anything goes. Removed from the content limits that cable and network channels have, HBO can show as much sex and murder as they please, much to our delight and horror.

Season 1 of House of the Dragon has already racked up a truly impressive amount of uncomfortable if not outright taboo situations, including child marriage, some casual homophobia, and of course–because it’s all about the Targaryens–a ton of incest. We’ve got sisters marrying brothers, uncles marrying nieces, and cousins marrying cousins. And yet, for anyone who isn’t watching and is currently wondering: why torture your eyes with all this heinous content? The answer is simple: people love shocking television.

The penultimate episode of House of the Dragon’s first season delivered more of the surprising moments we all anticipated. Amidst the violence, secrets, and scheming was an unexpected sexual favor which–despite the discovery of a child fighting ring and two violent deaths this episode–is all anyone can think about. It’s episodes like House of the Dragon’s Season 1 Episode 9 that make certain shows “appointment television,” something you have to watch lest you miss out on the weekly cultural conversation.

For anyone who hasn’t watched yet, the episode follows Queen Alicent after the death of Viserys. The king of Westeros is now dead, and after a deathbed miscommunication with his wife, Alicent is now convinced her son Aegon is meant to be king instead of Viserys’ firstborn daughter Rhaenrya, who is the rightful named heir. The entire episode sees Alicent bewildered and surprised by the number of supporters in her corner. But for one particular character whose intentions we have yet to understand, Alicent’s requests come with a strange price…

What Is the Foot Scene in Season 1 Episode 9 of House of the Dragon?

While Alicent and Larys (her confidant and unofficial spymaster) are discussing the fact that there’s a mole in the castle, we see Alicent rest her feet on the table in between Larys and herself. To be fair, she’s had a long day. Her husband isn’t even in the ground yet, perhaps still warm on the slab his corpse rests on, and here she is, making deals and discussing deceit and treason with every noble in the castle. Love her or hate her, but she deserves to put her feet up and have a well-deserved break.

They continue to talk and we see Alicent sigh. She removes her stockings with little fanfare and places her bare feet back on the table. We soon realize, however, it’s not for her own benefit. In fact, it’s for Larys, who we then realize has a strong and unabashed foot fetish. 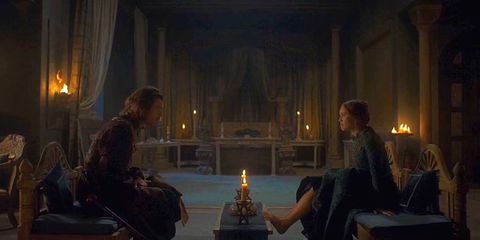 We here at Men’s Health aren’t shaming anyone for having a foot fetish. In fact, according to our own reporting, it’s a perfectly common and usually harmless kink. Ever see a Quentin Tarantino movie? That being said…Larys Strong is an upsetting person. I mean, who prioritizes their own sexual needs when their supposed friend (colleague? co-conspirator? boss?) is technically grieving? Couldn’t this (hopefully consensual) act wait for, say, a Westeros business day or two?

In case anyone is still confused, Larys Strong’s foot fetish is likely in connection to his own body. According to George R. R. Martin’s Fire & Blood, Larys was born with a twisted foot and is called “Clubfoot.” So his obsession with Alicent’s feet is possibly related to his background.

So there you have it, the foot scene in all its uncomfortableness, explained. We’re not quite sure if that’s all Larys is getting out of this arrangement, as he no doubt has a direct line to unlimited power and money due to his proximity to Alicent (and in an episode where Alicent’s father, Otto, has reached his long-awaited Super Bowl of scheming, Larys still seems a step or two ahead of him). Still, as far as transactions go, this one is icky. In an interview with Entertainment Weekly, Clare Kilner, who directed Episode 9, says it best. “It’s so intrusive and invasive,” she adds. “It’s a really dirty scene.”