Amazon Prime’s The Rings of Power, its lavish prequel to The Lord of the Rings based on ancillary works by J.R.R. Tolkien, just ended its first season on several enormous cliffhangers, with Hot Sauron gearing up to enact some dastardly plan in the newly established Mordor, leaving everyone else in Middle-Earth basically crying, shaking, and throwing up about it.

While the series certainly didn’t skimp on spectacle, it has faced some legitimate criticisms regarding its pacing: the storytelling moved at a glacial pace for several episodes, and the actual rings of power for which the show is named only make an appearance in the final 20 seconds of the season finale.

The show has also been accused by some viewers for queerbaiting, a term which describes writing or acting that hints at a gay relationship without ever making the effort to directly deal with LGBTQ+ content or themes. Given how historically underrepresented queer people have been in pop culture (and how desperate these audiences are to see themselves reflected in media), this can be a real problem. In terms of The Rings of Power, this critique centered on the elf Elrond and the dwarf Durin, whose friendship occupies the majority of the narrative’s emotional real estate.

This feels like it is by design: the writers of The Rings of Power seem far less interested in fleshing out the star-crossed relationship between Arondir and Bronwyn (a thin retread of LOTR‘s Aragorn and Arwen) than they are in exploring the depths and nuances of Elrond and Durin’s friendship, which is laden with affectionate banter but eventually leads to some moving, character-driven scenes which propel the plot forward. It is Durin’s love for his friend which causes him to defy his father and continue digging for the mithril ore which will restore the vitality of the elves—and his gift of mithril to Elrond dovetails directly with the creation of the titular rings. 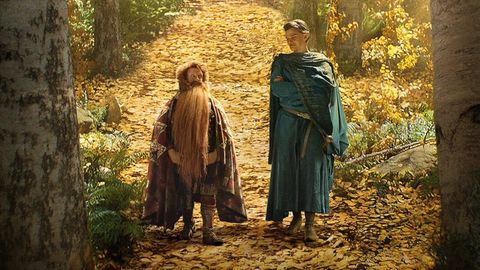 I’ve enjoyed the jokes about Elrond and Durin being squabbling ex-boyfriends as much as everyone else, largely because their scenes crackle with genuine warmth and humor, while so much of the rest of the series suffers from a po-faced seriousness. (Seriously, Arondir and Galadriel cannot seem to catch a break in their respective storylines.)

But does that make it gay?

I’m personally very familiar with the practice of shipping characters who are canonically not together, and of seeking out queer undertones when the actual text leaves me wanting more. And far be it for me to tell people what they should or shouldn’t take away from a piece of art. But I would argue that one reason people watching The Rings of Power were so quick to latch onto the idea of homoerotic subtext between Elrond and Durin is that we are still as a culture largely unaccustomed to seeing deep, emotionally meaningful friendships between men being depicted as such.

Yes, Elrond and Durin could be lovers, possibly even in a throuple with the generous and fun-loving Disa (who would absolutely be the top in that scenario, but I digress). It’s just as likely, however, and maybe just as narratively satisfying, for the two men to be such dear, lifelong friends that their bond is its own unique love story. We first get a hint at the real depth of feeling in their scenes together when Durin angrily admits he resents Elrond for staying away so long, for missing his wedding and the birth of his children. Later, Elrond is so eager to prove himself worthy of Durin’s trust that he threatens his own position within elven society by refusing to break the promise he made to the dwarven prince.

“I swore an oath to Durin. To some, that may now hold little weight. But in my esteem, it is by such things our very souls are bound.” — Elrond

These are juicy emotional stakes with real plot ramifications, and it makes me curious as to why there aren’t more stories out there about platonic love. Because in the grand scheme of my life, the most significant and transformative relationships I’ve ever had have not been romantic in nature. I would hazard that I am not alone in this.

Of course, you can’t talk about friendship and homoerotic subtext in Tolkien’s ouevre without acknowledging Frodo Baggins and Samwise Gamgee. The reluctant hero and his faultlessly loyal companion provide the emotional backbone that centers the Lord of the Rings trilogy, both on the page and the screen. That this pairing would go on to become the subject of so much fanfiction and queer projection is hardly a surprise. In fact, as Molly Ostertag wrote in a Polygon essay entitled Queer readings of Lord of the Rings are not accidents, it was inevitable:

“Queer people have always existed. The words for us have changed, will always change, but our hearts are the same. When we look at history, we must follow breadcrumbs to find ourselves. And like many of us, Sam Gamgee is obsessed with stories. He’s always noting that he and Frodo are in a great tale, and wondering whether it will be happy or sad. When he thinks he will die to defend Frodo’s body, he wonders if there will be songs written about this last act of loving defiance. He wonders, like so many others, if this love will be remembered.”

Each time I rewatch the films, I cringe at the mockery with which Sam is introduced in The Fellowship of the Ring, only to tear up by the time he steps forward in Return of the King and carries his friend who can no longer walk. It is a selfless act of love, and one which fully supports the popular queer reading of the text which posits that Frodo and Sam’s connection is as romantic as it is platonic. 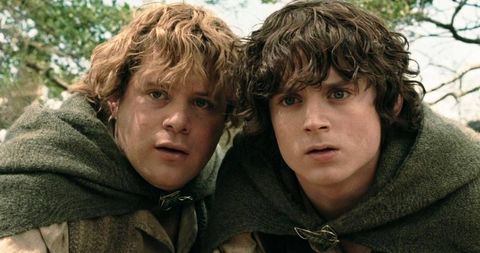 But such displays of loyalty and, yes, love, are everywhere in The Lord of the Rings. Every time I revisit the movie trilogy, I am struck anew by the immediate camaraderie between the nine men in the fellowship (technically only two men, joined by an elf, a dwarf, a wizard, and four hobbits, but again I digress); the brotherly bonds that are formed with such speed and strength that it is genuinely gutting when their group is separated at the end of the first film. And all of that makes perfect sense when you consider the historical context of the source material.

Tolkien wrote The Lord of the Rings between 1937 and 1949, and the text is heavily informed by his own experiences in the First. The horrors of war are front and center thematically, but so too is the importance of the emotional ties that keep us going when the world is, both literally and figuratively, falling apart around us. When Frodo tells Sam “I am glad you are with me, here at the end of all things,” they could well be the words of one soldier to another in the trenches.

In The Rings of Power, bonds of friendship are shown to be life-changing. Nori’s connection to the Stranger leads her to ever greater acts of boldness and bravery. Isildur, a key figure in Tolkien lore, would not make the choices he does without both the support and chiding of his peers. And then there are Durin and Elrond, who stay true to each other above all else, even if it means each betraying their own king.

Whether or not Elrond and Durin’s bond is revealed to have a romantic or sexual element in future seasons, or is simply that of two ride-or-die besties, it will stand out as the most emotionally engaging aspect of the show in its radical depiction of loving, non-toxic masculinity—not to mention this iteration’s most successful distillation of Tolkien’s worldview.

Maybe the real rings of power were the friends we made along the way.