Lord of the Rings: The Rings of Power spoilers follow.

Galadriel (Morfydd Clark) suffered some major blows in Lord of the Rings: The Rings of Power‘s final episodes of season one.

Not only did she let Adar (Joseph Mawle) slip through her fingers, the impact of his escape was worsened by the eruption of Mount Doom.

Its fiery lava decimated the Southlands leaving its remains ripe for Orc pickings, the very thing she swore to prevent, turning it into Mordor. If that wasn’t bad enough, the finale also came with its own sting.

Galadriel’s companion and comrade Halbrand (Charlie Vickers) isn’t the Southland king she thought him to be and is actually the exact opposite. He is the very thing she came to protect Middle Earth from: Sauron.

Yes, he’s back and shadier than ever.

The big reveal came after he manipulated the elves into forging rings from the mithril, no doubt hoping to wield its power for himself. In his enthusiasm he let a few tells slip, which encouraged Galadriel to do some investigating leading to the discovery of his true identity. (More on that here.)

Instead of a fight ensuing, the newly-healed Sauron attempts to manipulate Galadriel once again, this time urging her to join him in his quest for domination, all the while promising her power.

Though she rebuffs his offer and seems firmly against the very idea, it appears his words have affected her much more deeply than she let on. You might not have spotted it, but those words from Halbrand link to a key moment from The Lord of the Rings: The Fellowship of the Ring. 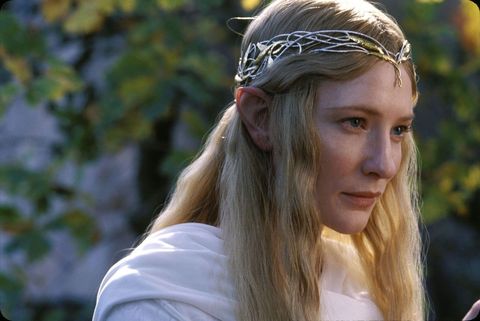 This is not the first time we’ve heard this speech. Galadriel (played by Cate Blanchett in the movie trilogy) will go on – in LOTR timeline-wise – to quote the essence of these very words centuries later to Frodo and his company in The Fellowship of the Ring.

When Frodo offers her the One Ring, Galadriel enters some malevolent kind of trance and says: “I do not deny that my heart has greatly desired this.”

This is certainly not the impression we were given in The Rings of Power finale, and just how much Halbrand’s speech impacted her is shown when she paraphrases it in her terrifying display to Frodo in The Fellowship of the Ring.

“In place of a Dark Lord you will have a queen. Not dark but beautiful and terrible as the dawn! Treacherous as the seas. Stronger than the foundations of the earth! All shall love me and despair.”

Galadriel comes to her senses before she takes the ring from Frodo, claiming to have passed the test. Considering the connection to The Rings of Power finale, it’s clearly something that’s weighed on her mind for millennia, so it proves to be even more of a challenge than we first realized.

Her moment trance-like breakdown in The Fellowship of the Ring proves that her moment with Halbrand-turned-Sauron was much more impactful than suspected.

Underneath her cool disgust, she was tempted by the power enough to recall some sort of altered version of his words. It clearly wasn’t as easy of a decision as it seemed to turn down Halbrand’s offer and maybe he really meant something more to her.

What that means for The Rings of Power season two is unknown. Galadriel could be put to the test a few more times, which will undoubtedly add more complications as she attempts to rid Middle Earth of Sauron’s hold.

Janet A. Leigh is Digital Spy’s TV Writer. She has a deep appreciation for Marvel, period dramas and good coming of age shows (especially ones with a Ginny and Georgia/Julia and the Phantoms/Never Have I Ever type vibe). In her spare time she heads up the Make Marvel’s Agents of S.H.I.E.L.D Canon campaign – new supporters of the cause welcome.

This article was originally published by Menshealth.com. Read the original article here.
Previous Post Sweata Weatha
Next Post The 'Uncut Gems' Team of Adam Sandler and the Safdie Brothers Are Making Another Sure-to-Be Nerve-Wracking Classic