Elizabeth Olsen has addressed rumors that she could return as Scarlet Witch again in the upcoming WandaVision spin-off Agatha: Coven of Chaos.

The star was last seen in the MCU in Doctor Strange in the Multiverse of Madness, where her character’s fate was left somewhat uncertain after letting the rubble of Mount Wundagore crash on her.

With Kathryn Hahn’s villain Agatha Harkness now getting her own spin-off series, the prospect of a return could feasibly be on the cards – though Olsen currently has no idea.

Asked by Entertainment Tonight if there were conversations about her popping up, the star responded: “I mean, no, but I would love to pop up. I love Kathryn, I don’t want to leave her side ever. I’m so grateful she’s here tonight.”

Olsen added: “We do think, ‘Gosh, we just gotta do it again!’ We just had a really great time making that show, and with Paul [Bettany], it was really a special time, so we would love to get the gang back.”

It comes after the actress said back in May that she was not set to appear in the spin-off, telling Good Morning America: “I would do anything with Hahn. I mean, no, I’m not appearing on it – not as far as I’m aware of. But I love that woman so much. So fun, that entire show was just filled with lots of joy, it was great.” 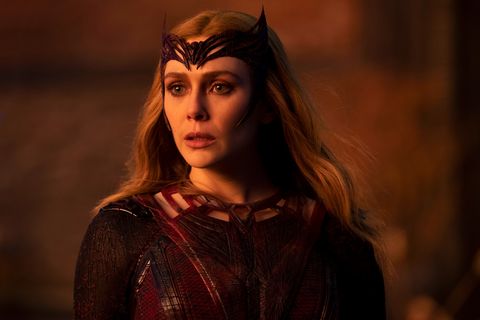 The star then quipped: “I hope [Marvel Studios president and producer] Kevin Feige is watching.”

As for her general MCU future, the star told Variety: “It’s weird that I’m expecting to return but no one’s told me I’m doing anything! But in my mind, I’m just making the assumption that they’ll have me again. I don’t know to what capacity, but I hope I’m back. I hope there’s also more fun to be had in something different. Where do we go? I feel like we’ve done so much with her. It’s been really a wild couple years with her.”

Both WandaVision and Doctor Strange in the Multiverse of Madness are streaming on Disney+.

This article was originally published by Menshealth.com. Read the original article here.
Previous Post The internet, recovery from surgery, and shared experiences
Next Post Community Finally Fulfills the Six Seasons and a Movie Prophecy