Hip-Hop Health: After 50 Years, It’s Time for A Check-Up

D Smoke is stunned. Sitting between hip-hop icon Styles P and Black Panther: Wakanda Forever trainer/Fit For Us co-founder Percell Dugger, the 37-year-old Grammy-nominated rapper knows positivity in hip-hop is seldom covered in the media. But, with rapper deaths, antisemitic rants, and arrests flooding the daily news cycle, three Black men opening up about the last time they cried, sustainable health habits, and generational health is abnormal in the best way.

Last week at SoHo Works in Brooklyn, NY, Men’s Health held its first-ever Hip-Hop Health: The 50-Year Check-Up panel, discussing how the genre’s relationship with health has evolved. August 11, 1973 will mark the 50th anniversary of DJ Kool Herc’s back-to-school birthday party for his sister at a recreational room on 1520 Sedgwick Ave in the Bronx, historically revered as the birth of hip-hop. As hip-hop inches towards AARP eligibility, the three panelists— D Smoke, Styles P, and Dugger— explained how the artists and the communities that make up the culture are promoting healthier lifestyles recently and have been leading people to those healthier choices for decades.

Styles P has been rapping on classic songs since appearing on the Notorious B.I.G.’s final album, Life After Death, in 1997 as part of legendary hip-hop trio The Lox. The 48-year-old lyricist has helped lead the charge of rappers exposing people to healthier ways of living over the last decade, co-owning fresh juice bar Juices For Life since 2011 and co-founding Farmacy 4 Life, billed as “Hip Hop’s First Health Food Store,” in 2018 with wife Adjua Styles. During the panel discussion, he pushed back against the notion of hip-hop primarily promoting unhealthy lifestyles of excess drinking and drug use in the past by highlighting how socially conscious artists from the ‘90s inspiring generations of listeners to question everything about their lives led him and others to start their health journeys.

“When I was coming up, I had different groups to get knowledge off of. You had A Tribe Called Quest. You had Public Enemy. Even if they weren’t talking about food, they were talking about certain context and content that’d lead you into certain areas of life to doing more natural things and research,” Styles P said.

Styles’ voice often grew passionately vehement when making the attentive panel audience take a macro view of hip-hop. He recalled the limited healthy food options he grew up with in NYC’s urban neighborhoods, likening poor people to targets of unhealthy convenience. He said Hip-Hop led him to a healthier life by affording him the economic mobility to move from those urban environments to places where healthy foods were the norm. ​​“When I was able to move to a more affluent neighborhood, I noticed the difference between the supermarkets and the stores. That became a real wake-up call,” Styles said. 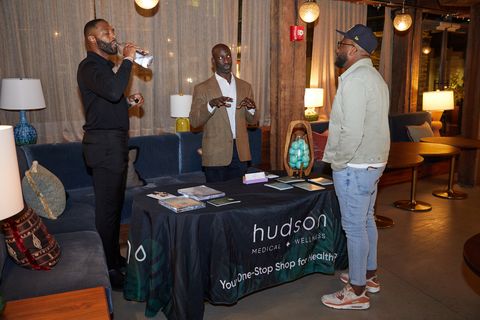 The discussion was a revelatory experience, with the panelists pushing against traditional views of health to make room for health journeys that don’t fit the status quo. Both D Smoke and Styles P spoke openly about favoring a wellness routine that factors in the reactionary care of western medicine and the proactive approach to holistic medicine. For Dugger, he advised people to throw away the idea of a one-size-fits-all approach to fitness in favor of one that fits them better. “We live in a world where people feel like they have to go to the gym three or four days a week and do an hour or hour and a half. You can microdose on movement,” Dugger explained.

Mental health was paramount at the Hip-Hop Health panel. Before audience members were treated to the discussion, they had a chance to get free mental health consultations from Hudson Medical Group, a multi-disciplinary medical practice. There was nothing traditional about how our panelists were exposed to mental health resources. Dugger revealed that his introduction to meditation came from his father’s battle with addiction. He remembered his father had a “peace room” where he would “meditate and navigate sobriety” when Dugger was in middle school.

For Styles P and D Smoke, being a rapper comes with an added burden that weighs on their mind. Originally slated to be a panelist, Jim Jones couldn’t make it to the panel due to attending the funeral of the late rapper Takeoff of the hip-hop group Migos, who was killed on November 1st. Gun violence has claimed the life of at least one rapper every year since 2018, leading to a tenured rapper like Jones to claim in a 2022 interview, “rappers have the most dangerous job.” While both Styles and D Smoke believe in karmic balance and protecting themselves from harm by putting out positive energy, they must keep the specter of death on their minds wherever they go. “We can’t ever get so complacent we forget there are people so sick they would harm the people who are well. Those are where tragedies are born,” D. Smoke said. “The rap part of me is like, ‘Ok, let me be wise.’ That’s an unfortunate reality.”

Throughout the riveting night, these men were open about their tears (“The last time I cried was yesterday. I was watching The Office when Jim and Pam got married,” D Smoke revealed). They were open about their goals (“We’re never going to achieve generational wealth without generational health. So, we need to wake each other up,” Styles P said). They were open about hip-hop embracing healthy lifestyles since its inception (“When Kool Here and those DJs in the Bronx were at that party, they were working out. They were dancing their asses off,” Dugger said).

For one night, hip-hop wasn’t a spectacle; it was a safe space. And there are more hip-hop health stories yet to be told.

Keith Nelson is a writer by fate and journalist by passion, who has connected dots to form the bigger picture for Men’s Health, Vibe Magazine, LEVEL MAG, REVOLT TV, Complex, Grammys.com, Red Bull, Okayplayer, and Mic, to name a few.

This article was originally published by Menshealth.com. Read the original article here.
Previous Post How to Deal With Side Effects of Medicine
Next Post 5 Best Smokeless Fire Pits in 2022 That Will Turn Your Backyard into an Outdoor Retreat