Leo Woodall Says The White Lotus Only ‘Gets Darker, It Gets Crazier’ From Here

The following includes spoilers for Season 2, Episode 5 of The White Lotus.

When Leo Woodall’s White Lotus character Jack, a cheeky Essex lad, first jumped in the pool with his toned, tattooed bod, hooting about his sensitive nipples, we knew he was trouble. And soon enough, he was enmeshed in a love triangle with Portia (Haley Lu Richardson) and the self-consciously nice “nice guy” Albie (Adam DiMarco). But we should have also known that a simple love triangle would be too quaint for creator Mike White.

And so, the plot thickened in Episode 5. Tanya and Portia decamp for Palermo to stay at an opulent villa owned by Quentin (Tom Hollander) with his posse of, as Tanya calls them, “high end gays,” and his nephew, the aforementioned Jack. Then, while Jack takes Portia on a night out of fun, arancini, and skipping out on the bill for said arancini, Quentin treats Tanya an evening at the opera to see Madama Butterfly. Afterwards, he tells Tanya about the his own unrequited love: a young, straight Wyoming cowboy he’d met during a trip to America in his youth. But he confesses that “love’s never been my Achilles heel. It was always beauty,” before digressing into a foreboding rhetorical: “I’d also die for beauty, wouldn’t you?” As for Jack and Portia, they arrive back at the villa, and Jack leaves her to “do something for my uncle.”

Hollander has talked about the boldness of White’s plan for his character. “He’s not sticking to his formula. He’s being really courageous and reckless with it,” he said before. “I was thrilled to get on the ride.” Tanya later gets an eyeful of what that “ride” is exactly. She wakes up in the middle of the night and wanders the eerie halls of the villa following the sound of grunting until she walks in on a scene that rivals the shock factor of Season 1’s infamous rimjob scene: Jack mounting his “uncle” Quentin as the two go at it.

Once we, like Tanya, picked our jaws off the floor, we called Woodall up to talk about what we just saw. The 26-year-old breakout actor told us all about the kind of guy he thinks Jack is and how he stacks up against the season’s other men, each with their own complicated relationship with masculinity. And of course, he then broke down the process of making last night’s shocking scene happen—from reading it in the script for the first time, to choreographing it with intimacy coordinators, to re-recording the grunts in post-production—all in the hopes that it met the bar White set with Season 1. 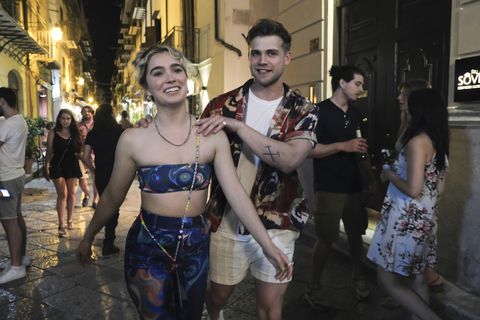 MEN’S HEALTH: What did you know about Jack and his, shall we say, trajectory when you auditioned and eventually got the role?

Leo Woodall: I knew that Jack was a fun-loving, dangerous, naughty Essex boy. So before I shot my audition tape for it, I watched some Joey Essex videos, put some sunglasses on my head, made a fake cocktail in a fancy glass, and went to town with it. I had a second round of Zoom with Mike, and I found out about a week later. Then I had a Zoom with Mike after getting the role to talk about Jack’s tattoos. During that call, Mike said to me, “You know, this role is gonna be a lot of fun.” And I just thought, “What does that mean?”

How did you come up with the tattoos you and Mike wanted Jack to have?

That was a fun conversation. Mike had some ideas of what he want—like, he knew he wanted something that creeped onto the neck. So I found “cowabunga,” which is his neck tattoo and that was Mike’s favorite one. A mate of mine suggested “live fast die young,” which is on my rib. My favorite, which I don’t know if people will spot, is “Wendy” on my bum.

“Mike said to me, ‘You know, this this role is gonna be a lot of fun.’ And I just thought, ‘What does that mean?’

Do these tattoos scream “naughty Essex boy” to you?

Some of them do, but they more scream “impulsive!” He just wouldn’t have thought much about the meaning behind these tattoos—and he would have probably been hammered getting all of them. The only one that he probably would have put some thought into is the tattoo of hammers on his arm, because that’s [the logo for] his football team [West Ham United Football Club]. 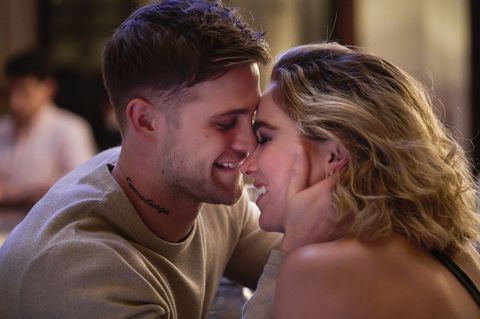 The men on this season all grapple with specific forms of insecurity, especially with their masculinity. Albie goes hard on the “nice guy” schtick, Cameron plays every “alpha male” move in the book, and Ethan is still struggling with the self-doubt of his college years. How do you see Jack fitting into this group of self-conscious men?

Well, I think he thinks about things the least. He’s the least bothered about what people think of him. Which I think in that environment, with all these characters, is kind of refreshing. He just doesn’t give a fuck about anything, really. He’s not insecure. Which can make him kind of gross in some moments. There are impulses that he follows that make you think, “You could have done without that, mate.”

But it also makes him fun and easy and comfortable in his own skin—a fuckboy with a heart of gold. I can see why Portia would have been drawn to a guys like him. How did you and Haley Lu Richarson develop that relationship? Had you met or done a chemistry test before arriving in Sicily?

Mike just has these instincts, and they are elite. He saw all of us individually, and he could just know know who’s going to mesh. Haley met up for coffee the day before my first day on set. We’d met but we hadn’t properly hung out yet. We got coffee and just shot the shit. She talked about my star sign for a good minute—I learned a lot about myself in that meeting, most of which I’ve now forgotten. We really clicked, and I had no worries about us being able to just riff off each other.

“He’s the least bothered about what people think of him. Which I think in that environment, with all these characters, is kind of refreshing. He’s not insecure.”

Let’s get to the night’s big scene. How did you first find out about the scene, and what was your first reaction?

When I got the role, I didn’t know what would happen with Jack’s story. At that point, I just knew that he was in the show. So when I got the first five scripts, I read them all straightaway. By the time I got to that point in the script, I could tell that something was afoot. And I remember reading it and immediately thinking about the scene in season one with Murray [Bartlett] and Lukas [Gage]. I’m actually really proud that I got to be part of the “volume two” of that scene.

Did you feel any competitiveness to outdo their scene in shock factor?

I don’t want to say competitiveness, but there was definitely a bar that had been set. And as a collective, we all thought it was really important that we meet that bar. But the show is too good, and Mike is too good of a creator for us to fall short. It was all already on the page, so we just had to do it. And…we did it! 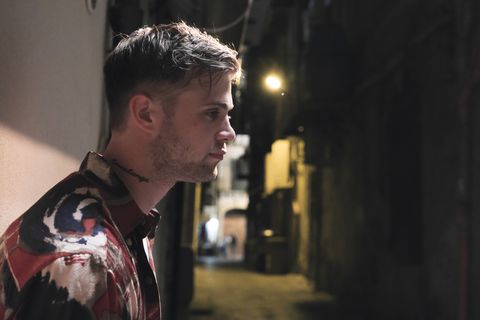 The episode presents the scene in and its lead-up in a subversive way—it all has an eerie, foreboding, almost-Gothic vibe. Did you expect that when you were reading the words on the page?

No, not really. We didn’t see the bits that they filmed with just Jennifer. We read it in the script, but it’s so hard to know what something is going to look like on screen when you’re just reading it on the page. But we could definitely tell it was going to be a dark, mysterious moment as you hear those grunts—which I had to record in ADR! Just go into a sound booth and stand there…and grunt. [laughs]

Did they give you notes in ADR on how to grunt? Like, “Faster, slower, louder, softer!”

Yeah, legit, it was that. “Think of the tempo, be aware of your breathing, watch yourself on screen and grunt in time with yourself.” It was it was absolutely ridiculous.

“It gets darker, it gets crazier. Does it get funnier? I don’t know! We’ll see.”

Did you have an intimacy coordinator on set to oversee and help choreography the scene?

It helps a lot. It makes us feel a lot more comfortable. We had some great intimacy coordinators that really locked it down. It’s a closed set, and only the very, very, very necessary people that need to be there will be there. And particularly in the scene with me and Tom, it was all choreographed to get the right feel, the right look for the scene, while also being protective of our angles and our, uh, nether regions.

What can we expect in the aftermath of this revelation?

It gets darker, it gets crazier. Does it get funnier? I don’t know! We’ll see.

One last question: if you were Portia, who would you pick between Albie and Jack?

If I was Portia? Albie! What she wants at the start of the series is someone a lot more like Jack, but I think I think long term, I would go for Albie if I were her.

So you fell for his nice guy shtick, huh?

I fell for it!

This interview has been edited and condensed.

Nojan Aminosharei is the Entertainment Director of Men’s Health and the Special Projects Editor of Harper’s Bazaar. He was previously the Entertainment Director of Hearst Digital Media, and before that a Senior Editor at GQ. Raised in Vancouver, Canada, Nojan graduated from NYU with a master’s degree in magazine journalism. The late Elaine Stritch once told him, “What the fuck kind of name is Nojan? I’m 89 years old, I don’t have time for that shit.”

This article was originally published by Menshealth.com. Read the original article here.
Previous Post How Writing in a Journal Helps Depression
Next Post Walmart fashion: Holiday fun for all ages