Latest:
We Tested the New Apple HomePods. These Are Our Major Takeaways. An Action Plan for Cold or Flu + COVID-19 Tom Brady and His Watch Go Out With a Bang Would You Wear It- Dress and Cardigan

The White Lotus Is Weaponizing Male Nudity in Season 2

HBO’s 9:00 P.M. time slot has often been the home for some serious action. We’re talking dragon fights, mafia shootouts, robot cowboy stand-offs, and even major corporate takeovers. But in HBO’s The White Lotus, now currently airing its second season in that coveted hour-long block, people should find something they can relate to much more directly: the action of microaggressions and gaslighting. And since we expect nothing less from The White Lotus, the early part of the show’s venture through Sicily has tied a pair of moments together with two pieces of connective tissue: the ever-skeptical Harper (Aubrey Plaza), and a bit of male nudity (with varying degrees of consent from Harper’s end).

After perhaps the most-discussed moment of The White Lotus: Sicily‘s premiere found the wealthy and stylish but socially-boorish Cameron (Theo James) changing into his bathing suit and letting it all hang out in front of Harper without as much as blinking an eye (or, you know, asking), the season’s second episode once again found Harper encumbered by an unexpectedly naked man—only this time it was her husband, Ethan (Will Sharpe).

There had been previous references to Harper and Ethan not having sex, and that theme was expanded upon in this episode. We see that Ethan gets up early to takes runs, and in the meantime Harper joined Cameron and his wife, Daphne (Meghann Fahy), for breakfast—something Harper could only bear for so long without losing her mind. Cameron and Daphne are simply too empty-headed for the more pragmatic Harper to be around for prolonged periods of time.

Ethan didn’t plan for this—and we see that immediately upon returning from his morning run, he grabs his laptop and begins to get down to some Ethan-time. He pulls up his pornographic website of choice and starts taking care of business, and isn’t so sleek. Harper gets back to the room and Ethan can’t even come up with an excuse. This sends the couple into an argument about how they aren’t quite on the same page sexually (morning person vs. night person, they say, something that Ethan later inexplicably brings up with Cameron and Daphne).

But the interesting thing that happens is that while Ethan is quick to cover up and put his underwear back on when Harper first walks in, as soon as he’s been caught and admitted to what he’s been doing, he takes his clothes back off and hops into the shower, all while discussing with Harper the fact that she thinks its weird that Cameron and Daphne claim to never fight.

While a husband being naked around his wife is obviously significantly different than the situation where Cameron—whom Harper hardly knows—just ripped his pants off right in her presence, it’s still the second week in a row where Harper is left fending for herself and feeling uncomfortable around a man choosing to be naked. In both of these scenarios, it should be Harper who’s the one in control; she’s the one escorting Cameron up to their room to put on her husband’s bathing suit. She’s the one who’s just caught Ethan in a compromising position (no matter how comfortable the couple is with one another). But in the two men’s confidence while naked, it’s Harper who winds up on the defensive. 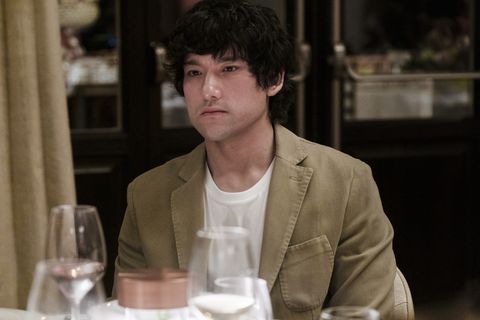 Writer/director Mike White is turning the dynamic on an interesting tilt here; typically, when someone is naked, they react like when Harper first walked in on Ethan. They’re embarrassed, eager to cover up and not be seen. But now two episodes in a row have found a man stripping down and making Harper—fully clothed, of course—be the one to feel vulnerable and like she needs to double down and stand her ground. Ethan is closer to Harper than Cameron, but perhaps this is the beginning of a season-long pattern that could lead her to realize that her husband is more like his obtuse friend than either of them will want to admit.

The fun thing that The White Lotus showed us in its first season is that White is not writing according to any specific formula; if you expected the grounded Rachel (Alexandra Daddario) to leave her douchebag newlywed husband Shane (Jake Lacy) by the end of the season (even after the way things ended!), you were sorely mistaken. Those sorts of surprises are everywhere in this show.

If traditional storytelling tells us that people can change and the right thing will ultimately win out, The White Lotus wants us to instead think what if it doesn’t. White takes a grounded and, ultimately, realistic approach to everything. And that could mean that Harper sees more and more as the series trudges on that her husband is more like the guy who essentially exposed himself to her than any nice guy she was seeing before.

This article was originally published by Menshealth.com. Read the original article here.
Previous Post How To Wear a Peasant Top Yet Not Look Like a Bumpkin
Next Post What Is DiscussingFilm?

FIVE LONG years after Apple rolled out its 1st generation HomePod, the tech giant has finally come through with…

Would You Wear It- Dress and Cardigan