Wakanda Forever Picks a Brand New Black Panther. And It Gets It Right.

After the unexpected and tragic 2020 death of Black Panther star Chadwick Boseman, one thing was made very clear: there would be no recasting of Boseman’s MCU hero, King T’Challa. “It just felt like it was much too soon to recast,” Marvel Studios president Kevin Feige told Empire in a story about the making of the Black Panther sequel, Wakanda Forever.

While the movie keeps true to its word in not recasting T’Challa and pays tribute to Boseman throughout, the title of the movie, after all, is Black Panther: Wakanda Forever. There was always going to be a new Black Panther in a Black Panther movie—and after the movie’s trailers kept the identity of this new superhero a secret, the movie itself doesn’t beat around the bush.

Before the movie, there seemed to be many candidates for who might drink the Heart-Shaped Herb and become Wakanda’s new protector as Black Panther. The frontrunner was always going to be Princess Shuri (Letitia Wright), who takes on the mantle of Black Panther in the Marvel Comics and was a fan-favorite in the first movie along with Avengers: Infinity War and Avengers: Endgame. But other theories were out there: could it be Nakia (Lupita Nyong’o), T’Challa’s former lover and a powerful warrior in her own right? Perhaps M’Baku (Winston Duke), who nearly took the mantle for himself early on in the first film, had a stake to claim. Hell, many even thought that Killmonger (Michael B. Jordan), who, yes, died in the first movie, could make a comeback and re-claim the title.

But now that Black Panther: Wakanda Forever is over, the speculation can come to an end—we have our answer.

How does it happen? Well, you may recall that in Black Panther, after Killmonger drinks the Heart-shaped Herb, he has the garden burned; his intention is for him to have all the power, and for no one else to have the opportunity. But we learn in Wakanda Forever that Wakanda isn’t the only location of Vibranium; Talokan, the underwater kingdom where Namor (Tenoch Huerta) and his people live, also has a large supply of it. And Shuri realizes that she can 3-d replicate the herb (or something close-enough to it) as a way to visit her late-mother, Queen Ramonda (Angela Bassett) and, maybe along the way, get herself some super strength and powers.

The Black Panther: The Saga of Shuri & T’Challa 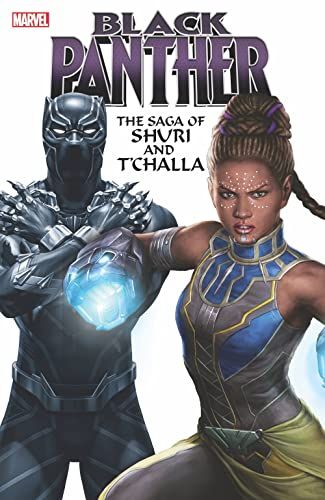 The Black Panther: The Saga of Shuri & T’Challa

Shuri is one of the smartest people in the Marvel universe (with the only ones even close to her being Tony Stark, Bruce Banner, and Reed Richards), and so of course her scientific endeavor is successful. However, while there’s no debate over who’s going to be the one who drinks the herb and visits the ancestral plane, there is a surprise when Shuri gets there. In the plane, she doesn’t see Queen Ramonda, but rather her late cousin, Erik Killmonger. He tells her that he’s seeing her because she has a choice to make—she can be noble to a fault like her late brother, or she can be a go-getter who doesn’t play by the rules, like him.

The final act finds Shuri distraught, and constantly riding the line of whether she wants to follow the noble path of her brother or the vengeful path of her cousin. She largely veers toward the latter, desperate to avenge Namor’s drowning of Queen Ramonda. But ultimately she decides there’s a better path forward—like her brother would have wanted to.

This is quite the smart choice by director and co-writer Ryan Coogler, as it continues to play on something that basically every Black Panther viewer realized: Killmonger had a pretty good point—he just went about it the wrong way. Shuri makes the best of her Black Panther turn, seemingly drawing a happy medium between her two family members who most recently held the mantle before her.

Shuri proves to be the right person for this task, too—Wakanda has always been about the importance of its people and its consistency; the people of Wakanda are a tight knit community. It makes sense that Shuri, who has always been a public-facing family member (Riri Williams (Dominique Thorne) immediately recognizes her at MIT, so we know Shuri is also famous) would be a natural fit, and someone who is naturally accepted as the new Black Panther.

And as the movie’s closing credits state, “BLACK PANTHER WILL RETURN.” We’ll be seeing more of Shuri, and we look forward to seeing how she continues to grow into her new role among both her people and the world.