Stephen Amell may have walked away from the role of Green Arrow, but just like many other superheroes who have hung up their suits, it seems we may not have seen the last of him.

The actor, who played billionaire-turned-vigilante Oliver Queen in The CW’s Arrow for eight years, recently spoke about the possibility of reprising the role in the newly rebooted movie universe.

“If I’m going to be a part of the DCEU, I’d probably just want to play the Green Arrow in there,” he told the Geek House Show. “I mean, are they still separate? Didn’t we have two Flashes in the Arrowverse at one point? So, I don’t know. We’ll see. Whatever they want.”

Amell’s version of the character was killed off in 2020, during The CW’s crossover event “Crisis on Infinite Earths,” which encompassed Arrow along with its attendant superhero shows Supergirl, Batwoman, Legends of Tomorrow and The Flash. But with James Gunn and Peter Safran now wiping the DCEU slate clean and starting from scratch, who knows what could happen next?

“I’d say f I had to pick one, I’d pick my own movie,” Amell continued, “only because there are so many things that selfishly I would like to do with Arrow that we couldn’t necessarily do on TV… There’s a Superman storyline that we thought about potentially doing a Green Arrow movie several years ago, that would be exciting, and then there’s the great storyline of the Hard-Traveling Heroes, which is Green Arrow and Green Lantern, that would be really fun.” 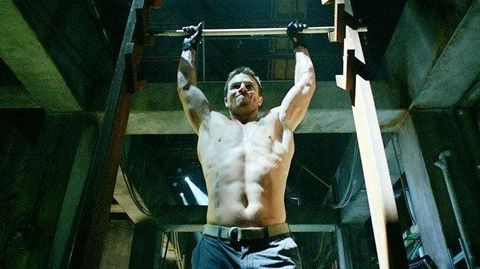 “Just in general, it would be nice to show blood,” he added. “Because we could kill 30 people in an episode, but we weren’t allowed to ever show blood or a broken bone or say a swear word or anything like that.”

This article was originally published by Menshealth.com. Read the original article here.
Previous Post Habits: Ways to Set Good Ones and Ditch Your Bad Habits
Next Post Sixteen weeks since total knee replacement and Sam is checking in