When Jonathan Majors’ Mens Health cover story dropped online, complete with a photoshoot of his Marvel body transformation, it broke the internet—and sparked such a thirsty response that even more pictures were published in response to the high demand.

And now a secondary bout of Majors-related thirst is about to blow up, thanks to the first promotional still from his upcoming dark drama movie Magazine Dreams, set to premiere at the Sundance Film Festival next month. Majors plays an amateur bodybuilder named Killian, whose pursuit of physical perfection becomes an increasingly desperate search for meaning. The movie also stars Taylour Paige (Zola, Ma Rainey’s Black Bottom) and real-life bodybuilder and former Mr. Universe winner Mike “Titan” O’Hearn.

The image shows Majors in full physique competition mode, complete with shredded abs and skimpy thong, although it sounds like Magazine Dreams will explore a more emotionally harrowing side of bodybuilding. Majors takes the physical aspects of his work seriously, and he knows that pro bodybuilders will have all kinds of opinions about Magazine Dreams when it’s released next year. This came across during production; he was reportedly lifting with such intensity while filming the opening scene of the movie that director Elijah Bynum told him he had to “take it easy.” 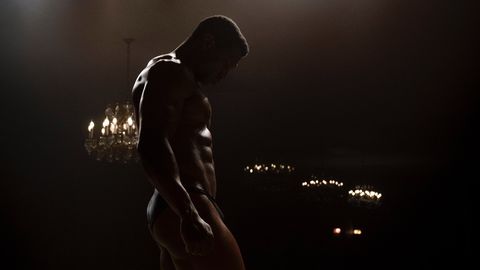 Embodying character through physical transformation has become very much a part of Majors’ process as an actor: after gaining 10 pounds of lean muscle to play supervillain Kang the Conquerer in the MCU, he packed on another six to play Killian.

“When you see these guys, it’s like, Yeah, they’re fucking fit. But if you look at it, there’s a story there,” Majors told Men’s Health. In Killian’s case: “That’s a pain body. A lot of guys build their bodies by anger, which is a secondary emotion… And those bodies don’t look right. Those bodies don’t engender emotion.”

This article was originally published by Menshealth.com. Read the original article here.
Previous Post Graphic Medicine: The Unlikely but Promising Partnership of Comics and Health Care
Next Post Building a FIFI Playlist