Who Dies in The White Lotus Season 2? An Investigation.

The following story contains light spoilers through Episode 6 of The White Lotus, Season 2.

Both the first and second seasons of HBO’s The White Lotus have something in common: someone winds up dead. But both seasons also have something else in common: there’s so much anxiety-inducing, conversation-starting drama that occurs within the show’s many intertwining storylines that the mystery of who died and who may have been responsible, somehow, winds up feeling like something of an afterthought. Would you believe it?

As far as Season 2 goes, we can feel confident that once again the dead body and the person responsible for that dead body come from one of our several lead ensemble cast members.

There are a couple people we can be confident will not be killed: first, Daphne. If you recall, Season 2 of The White Lotus opened up with Daphne telling a couple resort guests on the beach about just how good of a trip she had… only moments before discovering a body in the water and running, flustered, back to land. We also then see hotel employee Rocco (Federico Ferrante) tell Valentina that a hotel guest has drowned, and that other hotel guests have also been killed. When Valentina pleads for Rocco to please just tell her exactly how many, he doesn’t have a straight answer. “A few,” he says. Helpful!

Anyway. Let’s try to get to the bottom of this. No promises that any of these will be right, but we can promise that there is some writing on the wall. HBO is not screening The White Lotus Season 2 finale for critics or media, so no one making predictions knows what’s going to happen. Everyone is on a level playing field.

Anyone watching White Lotus should have had the foresight to see right through Albie’s “nice guy” act. While he initially just seemed timid and a bit embarrassed of his grandather’s bravado and dad’s infidelity, as soon as Albie started telling Portia about how he’s drawn to “wounded birds” and hopelessly latching onto her (and later, the probably a bit more dangerous Lucia), it became pretty clear that things may not end well.

There are a few ways things could go. The Albie-Lucia star-crossed-lovers pairing (kidding!) took a turn in Episode 6 when she left the family’s car to go with someone who the pair saw on the streets in the previous episode, who she seems to imply wants money from her. However, wouldn’t it be very White Lotus for that guy to just be someone in on a scam Lucia is setting up to get money from this “nice guy?” And wouldn’t it be very White Lotus for things to go off the rails when Albie kills the threat to his “wounded bird” rather than forking up any money of his own?

Let’s also consider the fact that Lucia told Albie that Cameron (and Ethan) owe her money for their big night together. Could Albie take matters into his own hands and “protect” Lucia from her past clients?

Albie tries to kill someone and it fails

As much as the scenarios mentioned above might seem in line with what the show would do, doesn’t it also feel very White Lotus for a scenario where Albie finally has the blow-up we’ve all been expecting for weeks, and goes after, say, Cameron or Ethan, only for it to completely fail and he winds up hurting himself.

The one thing that works against this is that it kind of seems out of the tone of the show. Season 1 featured a victim (in Murray Bartlett’s Armond) who had made several mistakes and, as far as we can tell, was alone at the resort. The tone wasn’t drastically changed by anyone else in the show mourning the immediate aftermath of his death. As cringe-worthy and toxic as Albie is, he’s still a relatively young person on a trip with his family. It would be a fairly dark twist for his grandfather and father to go home without him, and not one we necessarily see White Lotus doing. 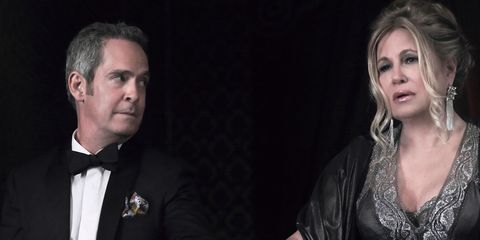 Some people seem to think this is a possibility, especially after the (basically) reveal that Greg is the cowboy from Quentin’s Episode 5 monologue about love.

But I would lean away from that; while Greg and Quentin are certainly in cahoots (and Jack is most certainly an escort that Quentin brought into the fold to keep Portia distracted), Quentin wouldn’t have had to go through the whole scheme of presumably setting Tanya up with this other man if the plan was simply to kill her afterwards. If you believe that Quentin was helping to set Tanya up so Greg can get out of their pre-nup and get a whole lot of money (some of which, Jack mentioned, would go to Quentin), their job is complete after the Episode 6 party.

It may actually be more foreshadowing if Quentin is the one who ends up dead; he asked Tanya if she would die for love. If Quentin’s scheme with Greg to swindle Tanya winds up exposed, perhaps the cowboy that he would “do anything for” ends up being responsible for his own demise.

This one is not super deep; Ethan proved in Episode 6 to be quite paranoid. We saw him slamming the door open and shut when he suspected that Harper and Cameron were up to something. We also saw him looking like he was about to explode at any given moment. He thinks his friend and his wife are out to get him (by possibly hooking up with one another), and, while this is tangential, certainly does not seem to have the mental makeup to be someone of a higher class (we know that he’s recently come into a ton of money) who will likely be under frequent scrutiny.

That said, he was simply so mad for so much of the penultimate episode that it almost seems like blatant misdirection.

In the very first episode of Season 2, while Harper, Daphne, Cameron, and Ethan were being shown their rooms for the first time, they were asked about a statue present. This statue, it turns out, has a backstory in the Italian folklore of “Testa di Moro.”

“The story is a Moor came here a long time ago and seduced a local girl. But then she found out that he had a wife and children back home,” Rocco explains to the four of them. “So, because he lied to her, she cut his head off.”

Cameron then cracks a joke, “If you come into my house, don’t f— my wife,” which they all laugh at. Daphne responds: “It’s a warning to husbands, babe. Screw around and you’ll end up buried in the garden.”

Given that Daphne clearly knows about her husband’s infidelities (and told Harper as much about her trainer and, well, the truth about their two kids), and that Harper is suspicious of Ethan if we’re being generous, it feels like this story is particularly relevant to how things might play out. Could Harper and Daphne kill both husbands and Daphne’s shocked nature was an act? Could Cameron’s joke have been a bit of foreshadowing, since it seems like a distinct possibility that he could have, literally, come into Harper and Ethan’s house (hotel room) and gotten busy? At the very least, we know that he, objectively, came into their house (hotel room) and took his clothes off in front of his wife. So there’s that. A lot to consider here.

Guys. There was a gun in the last episode. We talked about “Chekov’s Pineapple Knife” at the conclusion of The White Lotus Season 1, and, well, the penultimate episode of Season 2 literally gave us a Chekov’s Gun. It’s been introduced, so that means it’s probably going to be used.

Now, having said that, it’s not certain that Tanya will be the one to use the gun. Maybe it makes its way into the hands of someone else—someone unexpected. But it’s something that any Lotus sleuths out there should have on the top of their mind.

This article was originally published by Menshealth.com. Read the original article here.
Previous Post Living With Major Depressive Disorder
Next Post When Should You Itemize Deductions?