Kaleidoscope Asks Who Killed Ray/Leo. We’ve Got the Answer.

Netflix’s Kaleidoscope is a heist story—with a twist. While you’ve likely seen Ocean’s Eleven, Reservoir Dogs, and Baby Driver (and if you haven’t seen Widows, the time to check that one out is now!), you haven’t seen a heist story like Kaleidoscope. This series, which stars Giancarlo Esposito, Rufus Sewell, Paz Vega, Tati Gabrielle, and Jai Courtney, among others, is split up into episodes that could, conceivably, be watched in any order—as long as the episode titled “White” comes last. It makes for all kinds of different story experiences, and also, by the end, leaves us both a bit frustrated and with some other lingering questions.

One of those frustrations: by including the episode “Pink,” a capsule of the time period that takes place six months after the big heist, Kaleidoscope removes basically all the tension from “White,” the episode that depicts the heist and is intended to be watched last. Sure, there are a couple final twists and turns in “White,” but when you’ve already seen what happens after, you’re not exactly dying to go back. It’s like getting to the climax of a book, and then jumping ahead and reading the epilogue. At that point, are you dying to go back?

Anyway. The closing moments of “Pink” show us Leo Pap/Ray Vernon clearly struggling, as he walks under a park tunnel with his rolling suitcase in tow. While he’s ready to live out what remains of his life in the peace he can manage—he’s already made right with his daughter, Hannah, earlier in the episode—another figure doesn’t want that for him. As the episode fades into a pink screen, we see someone follow Leo/Ray under the tunnel, pull out a gun, and, once the screen is fully pink, we hear it fire.

Leo/Ray’s “death”—if we want to call it that, who really knows—is another piece of the Kaleidoscope puzzle that isn’t really fairly laid out for viewers to anticipate or think about until they’ve seen “White.” While we see Leo/Ray walking feebly through the park tunnel, and we see someone with a colorful shirt staking him out and ultimately following him, we have no reason or idea to suspect who that could possibly be. Sure, we have a general idea of who would have it out for him—he tried to steal 7 billion dollars from one group of people, and had one guy sent to jail for two decades, for starters—but we had no reason to wonder who this murderer could be.

Outside of that shirt.

We saw at the start of “Pink” that Roger Salas (formerly known as Graham, played by Rufus Sewell) wanted revenge on Leo/Ray, his old partner. And one was he was going to try to get it was by incentivizing Bob (Jai Courtney) to kill Leo in exchange for some fund money.

We also know that six months earlier, Roger had a conversation with his son, Brad, about dropping out of school and working for his company. His main takeaway: “These decisions that we make, they have consequences. Good or bad—they matter. Everything that happens in your future comes from the choices you make in your past. And nothing you can do can change that. So think about it.”

Obviously, this is a bit of attempted meta-subtext on the way we’re seeing the show play out; we’re, in this instance, seeing the past that played out prior to the future we’ve already seen. But in showing Brad Salas willing to drop out of school in order to work for his dad, we get the sense—even though he’s hardly a character in Kaleidoscope at all—that he’s impulsive and impatient. And with his dad imprisoned, it would make sense that he’d go after the person responsible for that.

And, again, you can take a look at the shirt. 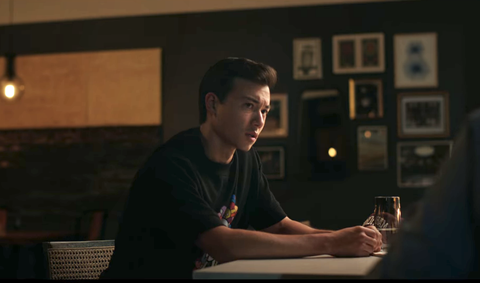 Now, something that it seems like the Kaleidoscope creators didn’t really think about is the fact that there are six months in between these two scenes. But we all know that when someone goes out to murder their incarcerated father’s enemy, the first thing they do is throw on the same graphic t-shirt they were wearing when they had a significant conversation six months earlier, right?

Did Leo/Ray actually die in Kaleidoscope?

That’s a reasonable question, considering we saw Brad pull up behind Leo/Ray, and heard the gunshot, but never actually saw anything. The rule in TV and movies is, of course, if you don’t see a body, they’re not actually dead.

Most likely, Kaleidoscope intended for this to remain ambiguous. Did Ray/Leo talk his old friend’s son out of it? Did he dodge something? Or did he just get shot, his arc completed? That ending is for your own head-canon to decide. There’s also the possibility that Kaleidoscope could return for a Season 2. But that Season 2 could also be another story, with the show telling something else in its unique, fragmented style.

Esposito, who plays Leo/Ray, explained his take on the ending to TechRadar. “I want Ray to walk through that tunnel and see Hannah again,” he said. “I want him to have that final hug. Parkinson’s is a devastating, uncontrollable disease, but you can fight it and Ray has that fight in him again. As he walks, you don’t know if he makes it but, at this point of his journey, he doesn’t want any more loss. He just really wants to live.”

What he’s saying, ironically, could also be taken as ambiguous. As we’ve seen in so many movies and shows before, it’s possible that Ray exits that tunnel and sees/gets exactly what Esposito is describing. It’s possible that seeing and experiencing that could just be happening. And it’s also possible that he sees all of those desired things because he’s in the afterlife.

At this point, that’s for no one to know, and for you, the viewer, to decide.

This article was originally published by Menshealth.com. Read the original article here.
Previous Post What to Know About Newly Approved Alzheimer's Drug
Next Post Go Team 2023! Take It Day By Day